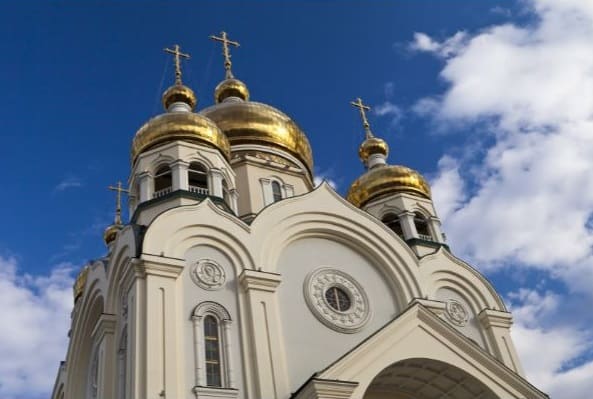 These are some of the general differences between the Catholic and Orthodox religions:

The Catholic and Orthodox churches are two great branches of Christianity. Together with the Protestant church, these three branches comprise pretty much every denomination of Christianity today.

Catholic and Orthodox (Often referred to as Roman Catholic and Eastern Orthodox) churches have a rich history that goes back to ancient times. That history has shaped who they are and how they practice their faith today.

Even though they split 1000 years ago during the Great Schism, do the similarities exceed the differences?

Although the Orthodox and Catholic church do share some key similarities, there are still plenty of important differences between them. Especially theological differences.

Here’s how Orthodox Christianity differs from Catholicism in terms of theology:

The Pope is not Recognized as a Supreme Authority

The Orthodox church holds a firm position that it has never accepted the Pope as the supreme leader of the Christian church.

The argument presented by Eastern Orthodoxy is that Rome’s primacy during the early church isn’t the same as the current doctrine of supremacy. Or to put it simply, the Orthodox church rejects the Catholic doctrine of papal supremacy.

In Catholicism, the Pope is considered as the “full, supreme, and universal power over the whole Church, a power which he can always exercise unhindered”.

Is this Biblical? Nope.

The church (i.e. body of Christ) has only One head (Jesus) Who holds all authority over His church.

The Belief in Purgatory is Rejected

The term purgatory stems from Catholicism and it stands for an in-between state, where the souls of saved people are purified before entering into Heaven.

It’s basically a state of final cleansing, according to what Catholics believe in.

However, this is not supported by Scripture!

Believers in Christ are washed clean of all our sins by the blood of Jesus Christ – there’s no need for extra “cleansing” prior to going into Heaven.

Christ’s redemptive work on the cross is complete and finished, period. End of discussion.

What did Jesus say while hanging on the cross, just moments before He gave up His spirit? “It is finished” (John 19:30 ESV).

If you’re a believer (i.c. accepted Jesus Christ as your Lord and Savior), you don’t need to go into a state of purging to remove the taint from you.

Jesus died for YOUR sins and now it’s finished.

The Holy Spirit Proceeds from the Father Only

Eastern Orthodoxy believes that the Holy Spirit proceeds from the Father and only from Him.

This is in direct contrast to Catholicism, which asserts the position that the Holy Spirit proceeds from both the Father and the Son.

Now, this is a very complex theological controversy.

It’s hard to come up with a definitive solution and that’s what caused the Great Schism in AD 1054 that made the two denominations go their separate ways.

Some Bible verses like John 15:26 ESV support the idea that the Holy Spirit comes from the Father.

But then we have verses such as John 16:7 ESV, where Jesus says that He will send the Helper (i.e. the Holy Spirit).

We can debate over this night and day, but in the end it’s not a salvation-related issue.

Listen – we cannot comprehend God, nor can we fully understand Him and His ways. We were made in His image, but we’re not carbon copies of Him.

Our Creator Has laid it out perfectly:

“For my thoughts are not your thoughts, neither are your ways my ways, declares the Lord.” Isaiah 55:8, ESV

Despite sharing a number of key differences, the Roman Catholic and Eastern Orthodox churches still share plenty of similarities.

Above all, they both represent Christianity… albeit in different forms.

Let’s now take a closer look at the main similarities between the Catholic and Orthodox branches of Christianity:

Both Date Back to the Beginning of Christianity

According to sacred tradition, both Catholicism and Orthodox Christianity were founded by Jesus during His earthly ministry in the first century A.D.

Okay, the word to focus on here is “according to sacred tradition”.

Jesus Christ didn’t actually invent either of these branches of Christianity. The entire Christian church was always meant to be unified in the faith:

In fact, prior to the Great Schism in AD 1054, they were both part of the Roman Catholic religion.

Which has absorbed some paganism as it has mixed Biblical truths with secular traditions and rituals.

We can be critical over this, but we can also note that the Catholic Church has engaged with many other belief systems over the last 2000 years. Nevertheless, it’s very important for the leadership to stand firm in the true Christian faith.

And this faith should always be grounded in the living word of God.

Both Believe that the Bible is the Word of God

Believing that the Bible is the authoritative, living Word of God is always a great starting point.

And Catholics and Orthodox Christians alike do believe in the authoritativeness of His written Word.

For example, Catholics view reading Holy Scripture as a way to understand God better. The Bible is also part of their liturgical worship services like Mass.

The Orthodox church also uses the Word of God during liturgies and other church services.

However, the Old Testament that the Orthodox church uses is based on the Greek translation (called the Septuagint), instead of the original Hebrew manuscripts used by the Catholic and Protestant churches.

Both Have the Same View on Passing the Authority

They believe that the authority of the church is passed down from bishop to bishop.

In fact, both denominations trace their apostolic authority back to the 12 apostles during the 1st century.

This was essentially when Christianity came into existence.

However, if we actually open the Bible, we’ll see that the real authority and the head of the church is Jesus Christ and Him only.

“And I tell you, you are Peter, and on this rock I will build my church, and the gates of hell shall not prevail against it.” Matthew 16:18 ESV

Christ is the head of the body (the church i.e. the believers) and the only One who has ultimate authority over it.

But while we Protestant believers have our own views on things let’s remember to always be gracious and charitable to sincere fellow believers from different denominations.

In the end what matters is Christ.

Both Believe that Christ is God in the Flesh

Both churches view Christ as God incarnate – fully divine and fully human at the same time.

Eastern Orthodoxy and Catholicism both believe that Jesus has two natures combined in one person as he’s God and man, both at the same time.

This belief stems from the Council of Chalcedon (an early Christian gathering) that took place in A.D. 451. (See my post on the Meaning of BC and AD and why the Gregorian Calendar is the only calendar that glorifies Christ.)

Now, this teaching is crucial. Not just for Catholics and Orthodox Christians, but for every single human being.

Understanding and believing that Jesus Christ is actually God in human form is an essential part of growing in your relationship with the Lord.

Jesus Himself left no doubt as to His divine nature in  John 14:9-10 by saying “Whoever has seen me has seen the Father”. In other words, Jesus Christ clearly claimed to be God, as I show in this post.

So this belief did not begin as Chalcedon. It was crystal clear way back in AD 33 when Jesus said it.

Why Did the Orthodox Church Split From the Catholic Church?

The split was caused by various reasons that mainly stemmed from religious and political disagreements between the western and eastern branches of the church.

Some of the conflicts and disagreements that led to the split between the Orthodox and Catholic churches include:

Basically, there was obvious tension between the church based in Rome and the Byzantine one based in Constantinople (modern day Istanbul, Turkey) that led to the inevitable split on July 16, 1054 A.D.

This resulted in the formation of the Western Roman Catholic Church and the Eastern Orthodox Church.

And this major event in the church history is known as the Great Schism or the East-West Schism.

This is usually considered the tipping point that led to the split between the Roman and the Orthodox churches in the 11th century A.D.

Not that Christianity didn’t have other problems at the time, but the controversy surrounding the origin of the Holy Spirit is quite significant.

Filioque is a Latin word that means “and son”, which was added to the Nicene Creed. This implies that the Holy Spirit proceeded from the Father and Son.

But this is how Catholics viewed it.

Orthodox Christians didn’t agree and stood firm on their belief that the Holy Spirit proceeds from the Father and the Father only.

Interestingly, Catholics and Orthodox Christians cannot resolve this dispute to this day.

There are verses in the Bible that support both claims, which makes this puzzle even more difficult to solve.

We just have to accept the fact that God is infinitely superior and incomprehensible to our limited human minds.

Instead of spending so much time and energy on this, the churches could have focused on preaching the gospel of Jesus Christ. Don’t you think?

After all, this is not something that will make or break your relationship with Christ.

It’s just one of the endless aspects of God’s person that we simply cannot grasp and fully understand.

So even with the differences between these two great branches of Christianity, they both still qualify as Christian.

Here are a couple of short and concise answers to frequently asked questions related to the differences between Catholic and Orthodox Christianity:

What’s the Difference Between Catholic and Orthodox Bible?

The main difference between the two Bibles is the amount of books included.

The Orthodox Bible contains everything that’s considered canon by Catholicism, in addition to several addition books:

What’s the Difference Between Catholic and Orthodox Cross?

Both crosses depicted in these religions are quite similar, although the Orthodox version has a few additional things over the more common Latin or Roman cross.

What’s the Difference Between Catholic and Orthodox Icons?

The main differences between icons used in Catholic and Orthodox churches are:

Generally though, Catholicism relies heavily on statues and all kinds of visual art, while Orthodoxy is pretty much all about icons when it comes to visual art.

The Catholic and Orthodox churches do have plenty of theological and general differences such as:

In the end though, both branches of Christianity have quite a bit of pagan and non-Biblical practices.

The most striking ones are the veneration of Mary in Catholicism, the use of graven images (statues) and the idol worship (bowing down to, kissing and praying with/to icons) in Orthodoxy.

Don’t forget what the Lord has commanded us in Exodus 20:3-5:

All praise be to our Lord and Savior Jesus Christ and to Him only, Amen.