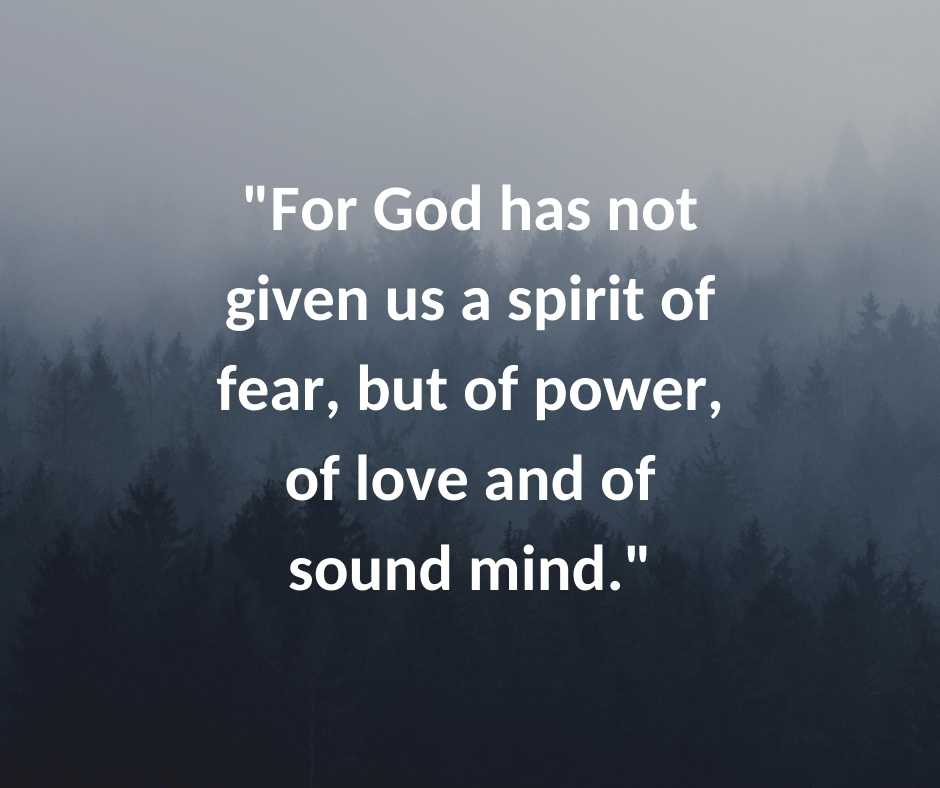 It’s one of the most inspiring verses in the whole Bible:

“For God has not given us a spirit of fear, but of power and love and a sound mind.”

And for a good reason!

This verse is jam-packed with meaning for the believer. It is like a vaccine against worry, doubt and fear. And it’s a significant boost to our joy, courage and faith!

Our God has given us victory over fear and doubt! Now we just need to lean into Him and his word.

But it goes deeper than victory over fear and doubt. The believer is assured of power, and love and a sound mind!

Our world sure needs all of these.

Who Said God Has Not Given Us a Spirit of Fear?

In the book of 2 Timothy 1:7, the Apostle Paul wrote a letter to one of his disciples Timothy. He revealed the truth about fear, and how God had given us permanent victory over it.

If there is anybody in the Bible who had a right to live in fear, it would be Paul.

Why? Because he had a lot of enemies and had to face lots of danger daily.

Paul gave us insight into what he passed through;

That is enough to make even the strongest and most self-assured men live in constant fear, but not Apostle Paul. He was able to face all the challenges and preached the gospel in places where he had received death threats.

Paul makes us understand that God had not given us the Spirit of fear. So we know the spirit of Fear comes from some other place and it isn’t from God.

Here is how he demonstrated that to us.

Once when he was told by a prophet that he should not go to Jerusalem because death was waiting for him there, Paul replied;

What was the secret of Paul’s boldness? Why was he able to conquer fear like no one else had done?

The answer is in the encounter he had with Jesus on his way to Damascus, where he wanted to kill and imprison Christians.

Jesus redirected his steps into the destiny the Father ordained for him.

When Ananias, one of the Christians, prayed for Paul, he was baptized in the Holy Ghost. That was the beginning of a new life for him.

He went on from that humble beginning to develop strength in the Holy Spirit as he continued his ministry of preaching to the gentiles.

The Holy Spirit is the Spirit of power.

Jesus promised His disciples that they would receive power when the Spirit would come upon them. God fulfilled the promise on the Day of Pentecost, and the terror-stricken disciples became extraordinarily bold to proclaim the gospel.

The Holy Spirit that worked in the disciples of Jesus, is the one that worked in Paul. The same Spirit wants to work in the life of all children of God anywhere they may be in the world.

What Does God Say About the Spirit of Fear?

After God created Adam and Eve, He commanded them to subdue the earth and have dominion over the fish of the sea, the fowl of the air, and over every living thing that moves upon the earth. (Genesis 1:28)

That statement reveals this to the Spirit-filled believer; man should not live in fear but take charge of everything God has created.

God also said the same thing to the children of Israel through Moses and Joshua as He led them to possess the Promised Land.

“Be strong and courageous. Do not fear or be in dread of them, for it is the Lord your God who goes with you. He will not leave you or forsake you.” Deuteronomy 31:6.

In the New Testament, Jesus told many people to “fear not” because He saw that the spirit of fear had paralyzed them and made them lose hope in the power of God.

The spirit of fear is the spirit of bondage. Satan uses this wicked spirit to rob people of their destinies.

Fear is the opposite of faith. God wants us to have confidence in Him to receive the blessings He has for us.

The Bible says, “No man can please God without faith.” That was the exact reason why Jesus said, “fear not, only believe.”

The devil knows the power of faith. He knows that he is no match for any child of God who has strong faith in God. Hence, he will often create an atmosphere of fear around us so that we find it challenging to have faith.

As a result, God rejected him as king and replaced him with David.

Fear made the children of Israel reject the Promised Land. They saw the inhabitants who were giants and became discouraged.

That became their undoing because God got angry with them and said none of them would enter into the Promised Land.

They all perished in the wilderness –except for Joshua and Caleb.

Fear made Peter deny Jesus. He had boasted that he would not forsake Jesus, even if all the other disciples should abandon him. When the spirit of fear entered him, he denied Jesus three times.

But later -after Jesus rose from the dead and ascended into heaven, he sent his Holy Spirit. Peter was filled with the Holy Spirit and boldness, because he was now energized and filled with faith!

Gideon was a man of courage, ordained to lead the battles of God and bring victories to Israel.

At first, Gideon did not know God ordained him for this.

The spirit of fear paralyzed him because he saw the Midianites wreak havoc in the land. God had to intervene to bring him out of his state of fear before he could be of any use to God.

Many people have been robbed of their destinies because of fear.

We need to agree with God that fear is an enemy and not a friend. We must build our faith and achieve great things in life.

What Does the Spirit of fear Mean?

Fear is the unpleasant feeling we have in the face of danger. It was never part of what God ordained for man from the beginning.

Adam and Eve had no reason to be afraid of anything before they sinned. They lived in the Garden of Eden with many wild animals.

They never had to defend themselves or worry about being attacked by any of these animals.

The animals had to fear them because they carried the glory of God, which covered them like cloth.

The Spirit of fear came when they sinned.

They became so afraid that they went to hide when they heard the voice of God in the garden. When God called out, Adam said. “I heard the sound of you in the garden, and I was afraid because I was naked, and I hid myself.”

Sin brought the Spirit of fear into the world, and it has remained up till today. Everyone living in sin is under the bondage of fear, even when no danger seems to be around them.

We need to repent of all sins to be free from the spirit of fear.

Justification from sin is one of the benefits of salvation, and it is the only solution to the problem of the spirit of fear.

The wicked flee when no one pursues, but the righteous are bold as a lion. Proverbs 28:1.

Moreover, whoever the son shall make free shall be free indeed.

Is Fear an Emotion or a Spirit?

It is possible to call fear emotion from a human angle. If we look at it from the truth of the word of God, we will see it is a spirit.

Sin entered the world when Adam and Eve ate the forbidden fruit. They immediately discovered they were naked, and they hid.

The fear they experienced was not just about the punishment they would receive from God. It was more than that.

What they did change was their nature. They could no longer carry the glory of God, which gave them divine power and authority over all creation.

It was not a temporary change but a permanent one which all humans inherited from Adam. That emptiness made man feel inadequate and insecure, which made man fear the animals and other things God had created.

In Roman 8:15, the Bible calls fear the Spirit of bondage, the Spirit that put people in bondage. That crippled their senses and made them cower before things that God originally placed under their feet.

In 2Timothy 1:7 also, the Bible calls fear a spirit. In the two passages, God’s word made us understand that God had not given us this spirit. That means it has come from the devil.

Fear is not a feeling that will come and go but a force that controls our lives. Interestingly, most human-invented solutions for fear do not work.

Also, today, people fear all sorts of things, including inanimate objects that are harmless.

These are not ordinary occurrences. It is an indication that there are powers behind the operation of fear in a man’s life.

Fear is an enemy. It is tormenting, and it has sent many to an early grave. The Spirit of fear is one thing that God does not want us to have.

It is a significant killer of faith.

There are 365 “fear nots” in the Bible. An indication that God wants us to resist and reject fear daily. Whether you will live in fear or build your faith in God is a choice you will make several times daily.

You must be conscious always that fear is always around the corner, waiting for opportunities to strike.

Peter in the Bible was so bold as to decide to walk on water with Jesus. The next moment he looked around him, and he saw a strong wind raging.

He became afraid and started to sink.

His saving grace was that Jesus was there watching. He quickly called out to Him for help, and Jesus saved him.

If you are under the bondage of the Spirit of fear, you can call upon Jesus today. He will deliver you like Peter.

If you are a child of God, you need the baptism of the Holy Spirit. He is the Spirit of power that can empower you to face all adversaries.

As a matter of urgency, you must stop the Spirit of fear before it stops you.

link to Why Jesus is Called the Lamb of God

Why is Jesus called lamb of God? In John 1:29, the Bible records the strange first meeting of John the Baptist and Jesus Christ since their meeting as fetuses in their mother’s wombs in Luke...

If you’ve never seen a list of the Worst Verses in the Bible before, you better hold on, because this is going to be a wild ride! I’ve compiled a list of the worst Bible passages from the Old...