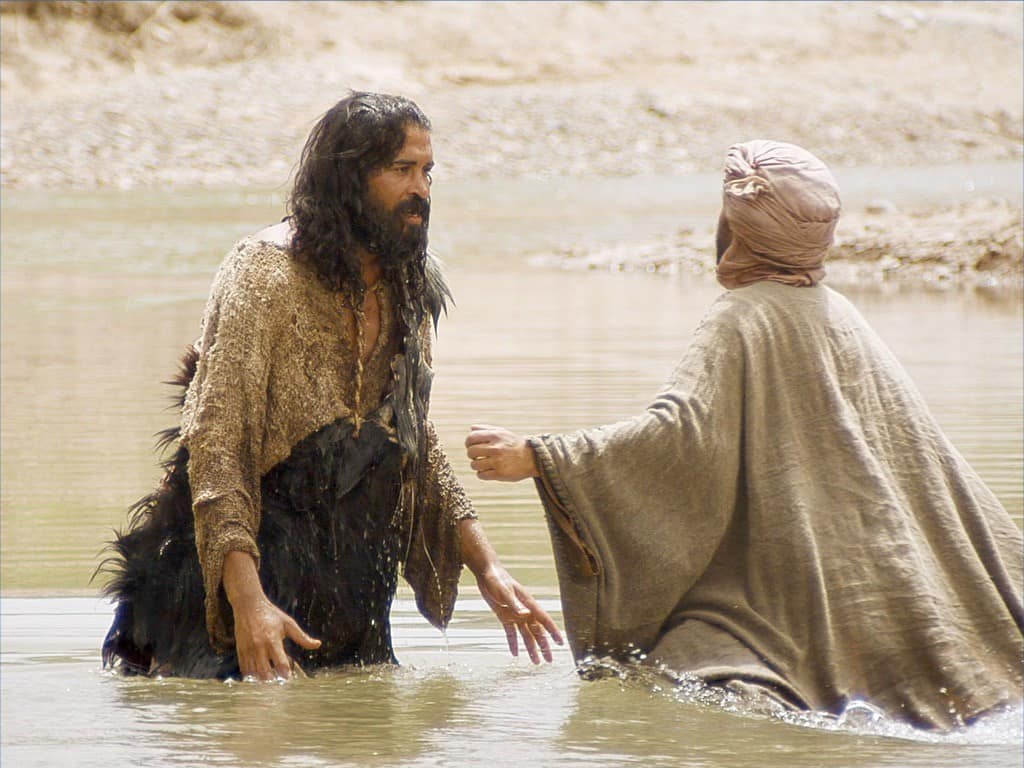 John the Baptist is one of the Bible’s most mysterious and beloved characters.

He occupies a very important position at the boundary between the Old and New Testaments.

What makes John so mysterious -and so beloved?

John the Baptist exactly fit the Old Testament prophecy of the forerunner of Christ. He was just like Elijah –wearing camel hair and a leather belt and eating locusts and wild honey. And when Jesus Christ was asked, he said that among those born of women there was no man greater than John.

But the mystery runs much deeper.

What did Jesus mean in Luke 7:27-29 when he said there was no man greater than John?

John’s work as forerunner of Christ had been foretold 700 years earlier in Isaiah 40:3-5. It just shows the amazing record of the Bible at foretelling so many important things.

John the Baptist had additional qualifications you may never have heard about before.

But they are hidden. Hidden in plain sight right in the pages of the Bible. Let’s look at them together.

John was born by a miraculous birth to parents who were well beyond their child bearing years. In the King James Version, it says they were “well-stricken in years.”

That means his parents were more like the age of Grandparents or even Great Grandparents. They were very old.

His mother –Elizabeth- was the cousin of Jesus’ mother Miriam (Mary), who herself gave birth to Jesus by a miracle.

You can read more about Elizabeth and her great faith at this post.

These facts about beloved John the Baptist are very unique and well-documented. But they only scratch the surface of the story of this remarkable man.

The Old Testament tells us about him ahead of time with multiple prophecies (we can add Malachi 3:1 to the Isaiah verses above) from different authors at different times.

And the New Testament records accounts of his life through all four gospels –with each Gospel showing us nuances about him.

So what makes John so beloved -and so great?

John the Baptist is beloved because he called Jesus “the Lamb of God that takes away the sin of the world.” He was great because he was the only Old Testament prophet to see Jesus Christ in the flesh.

So John’s greatness was due to his unique position. There’s a big mystery there, but there are even more mysteries ahead.

John the Baptist called Jesus by the unusual title “Lamb of God.”

But it’s not so unusual if you know about the many Old Testament references to the Lamb of God.

It all begins in Genesis 22 with Abraham and Isaac on the mountain where God tested Abraham’s faith.

There is the first Passover before the Hebrews left Egypt in the book of Exodus.

What Does the Bible Say About Baptism for the Dead?

Why is Jesus Called Son of Man?

Jesus‘ Many Blatant Claims to be God

Then there are the many Psalms with references to lambs and shepherds. And finally, the book of Revelation makes repeated references to the Lamb.

Jesus Christ is the Lamb of God from the Old Testament all-the-way-through to the very last book of the New testament -the Book of Revelation.

And he is also the King of the Jews, exactly as was written at the top of the cross on which they crucified him.

John the Baptist had to have very specific credentials in order for this proclamation to have any meaning.

What were those credentials that made John so special for his God-given mission?

Who Was John the Baptist’s Father and Mother?

In Luke 1:5 we learn that John’s father was a priest named Zechariah.

They were both descendants of Aaron, which made them both of priestly lineage. They were very old, and well past their childbearing years, and they had no children.

An angel appeared to Zechariah during his temple duty and announced to him that his wife would bear him a son and that he was to name the child John.

There had never been anybody named John in his family. In that day it was customary to name a child after a beloved member of the family.

The angel said what others would later recognize: “And he will go as forerunner before the Lord in the spirit and power of Elijah, to turn the hearts of the fathers back to the children and the disobedient to the wisdom of the just, to make ready for the Lord a people prepared for him.” –Luke 1:17, NET

About 6 months later, the same angel –Gabriel- would visit Mary the mother of Jesus and announce news to her that she would also become a mother because the Holy Spirit would overshadow her. (Luke 1:26-38)

After John was born, Zechariah gave a beautiful prophecy recorded in Luke 1.

When Was John the Baptist Born? And When Did He Die?

The angel of the Lord appeared to Mary mother of Jesus about 6 months after he appeared to Zechariah.

So Jesus Christ was born about 6 months after John.

That makes John about 6 months older than Jesus.

Jesus’ date of birth has been widely listed by scholars as around 6 -4 BC. Since John was born about 6 months before Jesus, there’s a good chance they were born the same year.

People also ask where John was born. Luke tells us his parents lived in the hill country of Judea, which is likely John’s birthplace.

This was probably within a day’s walk of Jerusalem. John stayed in the desert until the day came for him to be revealed to Israel.

John the Baptist lived to the age of 29-33 years old. He likely died around 29 AD in the first or second year of Jesus’ ministry.

These are very interesting aspects of his life, but the mystery of John the Baptist goes even deeper.

Why Did John the Baptist Die?

John had spoken out against the immorality of the King taking his own brother’s wife as his own.

In doing this, he not only raised the King’s ire.

But by this action, he also acted in the spirit of Elijah who also had spoken out against another King hundreds of years earlier –again confirming  what Jesus said about him.

The King had John arrested and held him in prison.

When his niece danced for him in a large gathering, she pleased him so much that he offered her anything she desired –up to half the kingdom.

Now you could say the handwriting was on the wall.

After consulting with her mother (the brother’s wife the King had taken), the niece asked for John the Baptist’s head on a platter.

Too embarrassed to say no, the King made the order and John was executed that same evening.

The Priesthood of John the Baptist

According to the Law in the book of Exodus, the Passover Lamb had to be perfect, without spot or blemish, and the priests were responsible to determine if the lamb offered for sacrifice at the Temple would be an acceptable sacrifice.

Only a priest could make this judgment. And this priest had to come from the lineage of Aaron.

The Passover Lamb was a type of Christ. It told us prophetically of the Lamb of God who would be sacrificed.

During those times, the priests would examine every lamb presented for sacrifice at the temple. It was to be a male 1 year old, perfectly formed, without spot or blemish.

No imperfection was allowed.

The priest’s job was very important.

John’s father, Zechariah and his mother, Elizabeth both came from the priestly tribe of Israel –the Levites.

That makes John the Baptist a full-blooded Levite from both sides of his family.

Another name for a priest is cohen. It’s the Hebrew word for priest. John’s father was a cohen, so John himself was a cohen.

The cohanim (plural form of cohen) were priests who would examine the sacrificial lambs for the temple sacrifices.

The only way to be a cohen was by birth.

They would be the final authority at the temple to determine if the sacrificial lamb met the stringent requirements of the Jewish law.

A cohen had to be a descendent of Aaron of the ancient Israelite tribe of Levi. So John the Baptist was the cohen who certified the Lamb of God met the requirement to be a sacrifice.

And this is the fact your pastor [probably] never told you about. Unless your pastor is Messianic Rabbi Jonathan Cahn.

We are blessed in these last days to have the insight of more and more Messianic Jewish believers in Messiah. They bring an amazingly fresh perspective to some of these stories we take for-granted.

Messianic Rabbi Jonathan Cahn points out in his Book of Mysteries [see Day (page) 66] that John the Baptist –due to his lineage as a cohen was even more qualified for his mission than we ever knew.

The Book of Mysteries on Amazon is available here.

John the Baptist’s life mission was to declare that Jesus Christ is the pure and holy Lamb of God. Only a cohen was qualified to make that claim.

This cohen was born miraculously to aged parents. And his father had been visited by an angel.

The arrival of John the Baptist on the scene was surprising to most, but it was prophesied hundreds of years ahead of time in the Hebrew Scriptures of the Old Testament. See below for more.

Even though his life is recorded in the New Testament, he is regarded as the last Old Testament prophet, because his story ends before the crucifixion, burial, resurrection and ascension of Jesus Christ.

Why Did John the Baptist Baptize?

The baptism of John was a baptism of repentance. Ceremonial washing was practiced by many as a Jewish custom, so John’s baptism was not too unusual to the Jewish people of the day.

This activity was part of his mission of readying the people for the coming Messiah. By baptizing, he was exalting every valley and bringing every mountain low.

He was making the rough places plain and making the paths straight for Messiah to come.

In the table below are answers to some of the most-asked questions about John the Baptist.

What Does INRI Mean on the Cross of Jesus?

What Does BC and AD Mean?

Are There Contradictions in the Bible?