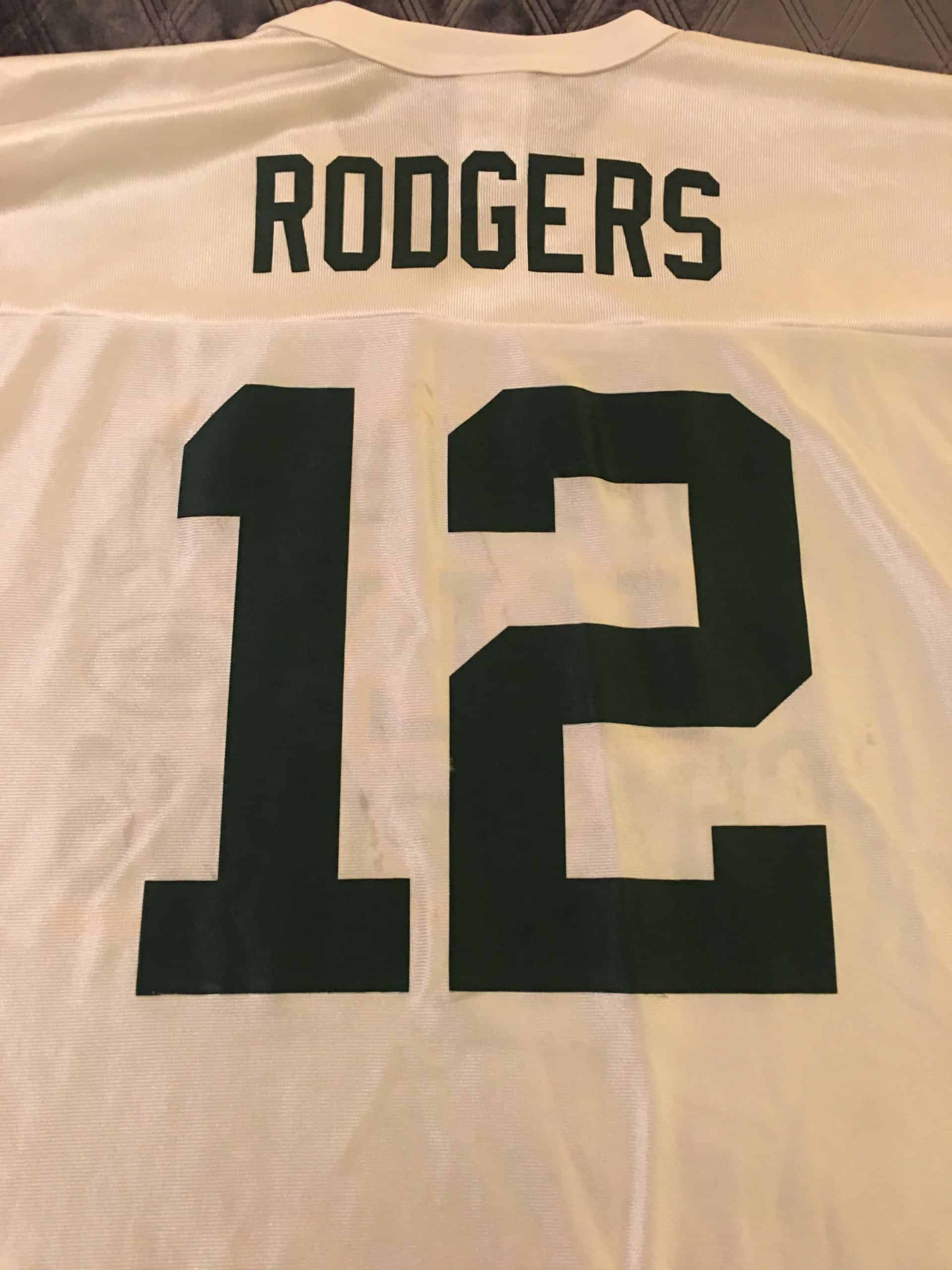 In this bizarre place, the world just got a lot stranger.

What if football was like Rob Bell says the spiritual world is?

Imagine an NFL football game where the quarterback gets sacked for a 15-yard loss.

The referee immediately signals a first down and the officials move the chains. The offense huddles and plays on.

What? If you know anything about football you’d immediately know something is wrong.

Next play, a pass is thrown. The receiver bobbles the ball as he’s going out of bounds. He only gets one foot in. No matter. The line judge signals it’s a catch. Another first down.

They get into field goal range and the kicker gets ready. He kicks the ball wide, but the referee thrusts both hands into the air. It’s good!!

The quarterback throws the ball 20 yards over the receiver’s head and it ends up in the stands. Touchdown!

Welcome to the Weird World of Rob Bell and Aaron Rodgers.

It’s a world where you can do no wrong. Make a mistake? It’s all been taken care of. You’ve fallen short on something? No need to apologize. It will all be worked out in the sweet by-and-by.

In this strange and surreal version of Green Bay’s Lambeau Field, there are no consequences for falling short. Everybody scores. Everybody wins.

But for anybody who thinks it through, it’s a religious and philosophical no man’s land of contradictions, fallacies and dead ends.

Related content: How Many Contradictions are in the Bible?

It’s like that old Winston Churchill quote about Russia: “It’s a riddle wrapped inside a mystery, inside an enigma.”

No, not the neighborhood of that other great American icon of yesteryear who raised millions of children from his place on the small screen.

This Mr. Rodgers is the future Hall-of-Fame quarterback of the Green Bay Packers along with his spiritual mentor –author Rob Bell.

Bell –of course, doesn’t like bearing the moniker of “Universalist.” But it doesn’t stop him from being one.

According to Bell himself, he seems pretty unsure about answers to most of the questions asked. So if you aren’t so sure about Rob Bell’s beliefs after this, you’re probably not the only one.

Who can blame Rob Bell for not wanting to be called a Universalist? It’s an illogical religion that has shrunk to almost nothing because most people know a $3 bill when they see one.

Which is why most Universalists try to dress up their beliefs with some other names.

Universalism teaches that all religions are fundamentally the same. As long as you are sincere, you’re OK. Well, it doesn’t take too much analysis to see what’s wrong with that.

Universalism is a religious view that all people –from every religion- will go to heaven. Now Universalists tend to frown on some of the most egregious sinners, but that’s where the problem lies.

Universalists expect to see Billy Graham and Mother Teresa in heaven –that is- if they get there themselves. But if they are right, there will be a few others we maybe wouldn’t expect.

If Christ’s love is irresistible –as Bell says- how can they resist it?

As if that’s not bad enough, it gets even worse. Even a cursory view of the major religions reveals that they are not in agreement.

This is where you’ve got to wonder exactly how Love Wins.

Most people know a counterfeit bill when they see one.

Rob Bell claims in his most famous book by this title that the love of Jesus Christ is so strong that in the end it is an irresistible love.

In eternity –by Bell’s reckoning- all people are drawn into the great tractor-beam of Christ’s love whether they want it or not.

So –for example- let’s consider a sinner like Joseph Stalin who before murdering millions of his own countrymen –for pure power and political purposes- was in fact a divinity student. Stalin would probably have heard –and ultimately rejected- the true Christian message of salvation.

But because of Christ’s irresistible grace, there’s Joseph Stalin in eternity, hanging out with Jesus. Problem is, the Bible gave a list of folks who wouldn’t make the grade –that is- unless they repented and turned away from their sins.

And guess what behavior is included among those who wouldn’t be with Jesus in eternity? Yes. Stalin’s murderous behavior –unless accompanied by genuine repentance and the transformation that has been seen in untold hordes of sinners and converts throughout history, including ex-murderers like King David and Saul of Tarsus.

You see, the love of Jesus Christ has won over many a sinner, but the sinner must repent and turn from his wicked ways –a behavior unnecessary to the Universalist. Stalin was recorded by his daughter as shaking his fist at God as his last- and most defining- gesture.

So, probably no tractor beam for him.

Another thing: Jesus is more than just love. Rob Bell -in Love Wins– sure talks up the love of God and the grace of God. And for sure, God is loving and gracious.

But when people get off kilter- it’s usually because they focus on one part of God’s attributes to the exclusion of others. Just as Rob Bell apparently has.

Many folks just don’t take the full counsel of all of scripture. And that is to their detriment.

God has many other amazing attributes. He is omniscient (knows everything), omnipotent (all-powerful), omnipresent, full of wisdom, knowledge and understanding. He is self-existent, infinite, perfect, and unchanging. You can read more about God’s attributes here.

One of God’s attributes is that he is holy. He will not allow sin in his presence. And the only way he made to deal with sin is through Jesus Christ. Salvation is found in no other name than the name of Jesus. (Acts 4:12)

The first coming of Christ was foretold many times in many places of the Hebrew Scriptures of the Old Testament. These prophecies accurately described the who, what, where, when and why of the coming of the Messiah who would take away the sin of the world.

These prophecies came hundreds –even thousands of years ahead of the actual events –a clear sign of divine origin. No human could know these things centuries in advance.

Some of the strong evidence of Jesus’ resurrection and ascension are that many of his followers chose to die brutal deaths of their own rather than deny what they had seen with their own eyes.

That which was from the beginning, which we have heard, which we have seen with our eyes, which we looked upon and have touched with our hands, concerning the word of life 1John1, ESV (italics added)

And there are many confirming historical records from reliable sources outside the Bible that were not friendly to the Christians, but they reliably recorded true history and ended up supporting the Christian faith.

So the Christian faith is supported by ample historical, literary and archaeological evidence, unlike Universalism.

You could say that -for Universalism- the Handwriting is on the Wall.

Football referees serve the important function of a fair and impartial observer. They also play the role of judge.

NFL referees do a fine job. It’s amazing how well their rulings survive the video reviews with all those slow motion replays. Referees –as judges- are responsible for meting out penalties for various infractions.

Unlike the referees in the football game, Jesus –the final judge of mankind- paid the penalty for all of our sins and shortcomings. All we have to do is repent and turn from our ways and chose to live according to his ways.

Now maybe you’re thinking that since Rob Bell’s newer book What is the Bible? has come out he must have grown wiser through the years and corrected his mistakes from Love Wins.

Well, think again. What Bell has succeeded at is throwing away 2000 years of the finest theological work on the planet, backed up with millions of hours of archaeological expeditions that have all confirmed everything is just as the Bible said.

Of course, if you are still curious, you can buy Love Wins or What is the Bible? on Amazon.

As for future Hall-of-Famer Aaron Rodgers? I’m still rooting for his to win the next Super Bowl.

And praying for him to get on his feet spiritually. I also hope he gets back together with his family that loves him.

Rodgers was recently quoted discussing religion with Danica Patrick on her YouTube channel:

This is a pretty common question many people wrestle with. And it seems difficult for those who haven’t learned how to scratch beneath the surface.

But it’s really not that hard to find the answer. It’s been hidden in plain sight –right in the Bible- for 2000 years!

Do you know John 3:16? Probably the most famous verse in the Bible? Here’s how it reads:

“For God so loved the world, that he gave his only Son, that whoever believes in him should not perish but have eternal life. John 3:16, ESV

But the very next verse has the answer Rodgers has been looking for:

For God did not send his Son into the world to condemn the world, but in order that the world might be saved through him. John 3:17, ESV

If you know Aaron, would you show this to him?

Dear Aaron Rodgers: God doesn’t want to condemn most of the planet to a fiery hell. He sent his son so that the world -including you- might be saved through him.

He came and experienced a cruel, brutal death so that imperfect people like you and me could experience an amazing eternity with the God who loves us!

And when he rose again, he defeated death forever. Our part is easy. All we have to do is believe in him.

And there’s plenty of evidence to back it up. He made sure of that, so believing in him is easy.

It’s not always easy for us to set aside our own pride and admit we have offended God and need his forgiveness.

Yet God also knew in his wisdom that everybody wouldn’t take him up on the offer. He allowed us the freedom to make that choice ourselves.

Choosing to reject God’s free gift of salvation is like throwing a pick 6 –to Rob Bell- on every pass attempt. It just won’t be fun after a while.

If God used tractor beams, he would be forcing the Joseph Stalins of the world to spend eternity with somebody they don’t like.

And that just wouldn’t be heavenly.