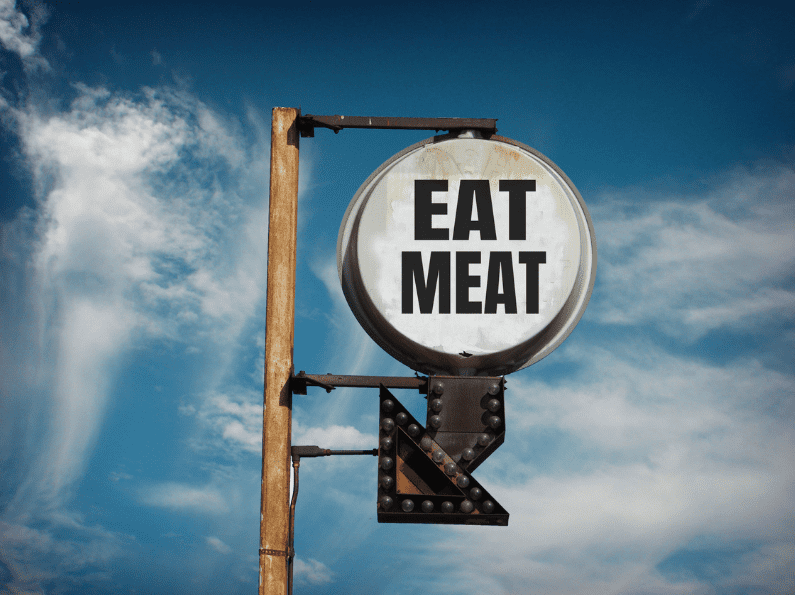 There are a lot of opinions about eating meat. There are plenty of different people with their own ideas.

But what does the Bible tell us? Or even more-to-the-point:

What does God say about eating meat? Is it a sin to eat meat according to the Bible? Does the Bible say not to eat meat?

The basic answers aren’t that difficult to find. But there are a few details we need to keep straight.

In Genesis 9 –in the very first book of the Bible- God tells Man:

The fear of you and the dread of you shall be upon every beast of the earth and upon every bird of the heavens, upon everything that creeps on the ground and all the fish of the sea. Into your hand they are delivered.  Every moving thing that lives shall be food for you. And as I gave you the green plants, I give you everything. Genesis 9:2-3, ESV (emphasis added)

So God tells us very early that he has given man every beast of the earth and every bird of the heavens as food to eat.

But this was right after the Flood. God was talking to Noah and his sons.

Before that, in Genesis 1:29-31 ESV, God had given man only a vegetarian diet:

So in Genesis 1, God gave to man and beast alike every green plant. But in Genesis 9, God gave man every beast to eat.

Why did God change man’s diet this way? And why did God give the Levitical dietary laws to the Israelites at Mount Sinai?

It was part of his progressive revelation of Himself to man. He set up the sacrificial system that showed us the penalty of sin is death. And the price to be paid would be paid in blood.

What we owed for our sin was our blood. But God temporarily accepted the blood of animals until Jesus shed his blood for us.

We know the Levitical laws were part of God setting his people aside as his own people – his own possession.

But In Genesis 9, God clearly makes a new covenant with Noah. “Every moving thing that lives shall be food for you.”

And since we now live under the New Covenant of grace, we can consume all kinds of meat without worrying about sin.

But this doesn’t mean that we have to mindlessly indulge in gluttony as Scripture lets us know that we have to control our appetites, not the other way around (e.g. Deuteronomy 21:20 and Proverbs 23:2).

Does the Bible Say Not to Eat Meat?

It’s not a sin to consume meat according to the Scriptures and there are plenty of verses that support this.

False teachings and religions such as Islam teach that certain foods are unclean (e.g. pork), implying that they somewhat defile the one who consumes them.

Not so fast though – the Living Word of God i.e. the Bible says otherwise.

One of the best examples comes from the Gospel according to Mark, where Jesus Himself tells us that it’s not what we eat that defiles us:

“And he said to them, “Then are you also without understanding? Do you not see that whatever goes into a person from outside cannot defile him, since it enters not his heart but his stomach, and is expelled?” (Thus he declared all foods clean.) [emphasis added]

Note that Jesus declared ALL foods clean. Not just some, but ALL types of foods – obviously including meat.

And if you want even more undeniable proof that the Bible doesn’t forbid consuming meat, we have to go to the Old Testament and Genesis 9:3.

Here the Lord Himself tells Noah and his family that every moving thing that’s living can be used as food for them.

However, don’t assume that this includes eating human flesh as permissible by God in His Living Word. Cannibalism is regarded as a horrible curse in the Bible (e.g.  Lamentations 2:20).

Using every living thing that moves refers to the animal kingdom, not human beings. And the context of Genesis 9:2-3 confirms that God is giving man only the animals to eat. Not fellow humans.

You have to remember that the Bible regards humans and animals as separate and distinct species (Genesis 1:26-27).

We are created in the image of God and our status is higher than that of the animals.

Make no mistake; cannibalism in all of its gruesome forms is an act of pure evil that’s a real abomination in the eyes of the Lord.

But Scripture lets us know that we can freely consume all other kinds of meat, including pork. You can read my post (see links below) for deeper details explaining why Christians can and should eat pork, shellfish and other animals declared unclean in the Old Testament book of Leviticus.

What Foods Does the Bible Says Not to Eat?

What Did Jesus Say About Eating Meat?

Jesus Christ had a few things to say to the Jews regarding meat and food in general with the most profound example being two particular verses from the Gospels and Mark:

“And he said to them, “Then are you also without understanding? Do you not see that whatever goes into a person from outside cannot defile him,”

Do you understand what Jesus means by telling the Jews and us His followers that we’re not defiled by what goes into our mouths, but rather what goes out of them?

He is referring to the fact that the food that we consume in order to stay alive doesn’t defile our bodies.

However, the things that come out of our mouths (the words we use) can most definitely defile us!

Yep, we corrupt and degrade ourselves when we use foul words, not when we eat meat or spoiled food.

Jesus makes this quite clear and easy to understand for us, but wait… there’s more to it! Even Christ consumed meat as Scripture shows:

“And while they still disbelieved for joy and were marveling, he said to them, “Have you anything here to eat?” They gave him a piece of broiled fish, and he took it and ate before them.”

Now, you might say that fish isn’t considered “actual” meat and that this example is irrelevant (which isn’t true).

So to please the critics and naysayers – remember that Jesus attended Passover as recorded in Matthew 26:17–30 ESV, John 2:13 ESV, John 5:1 ESV.

And as part of the law, the Passover meal included meat, thus Jesus would’ve been in disobedience of the Law if he hadn’t eaten from that meal.

Not only did Christ not command against consuming meat, but He ate meat Himself.

What Does God Say About Meat?

As previously mentioned, God allows us to eat meat freely as we’re defiled by what comes out of our mouths, not what we consume.

We can even find examples of God specifically instructing His people to eat meat in the Old Testament:

“They shall eat the flesh that night, roasted on the fire; with unleavened bread and bitter herbs they shall eat it.”

However, God adds a specific condition to this commandment in the very next verse:

“But you shall not eat flesh with its life, that is, its blood.”

God didn’t intend for us to be some blood thirsty savages that consume other flesh while still alive as in some horror movie. No.

Our Heavenly Father simply gave us both animal meat and all green plants as food.

We shouldn’t add or subtract anything from the Holy Word of God i.e. the Bible.

And God did permit eating meat for all humanity, according to Scripture.

What Does the Bible Say Not to Eat?

The Bible lists a number of specific things that the Israelites are not to eat in the book of Leviticus.

This is where God Himself tells His people that they shouldn’t consume certain things as a way to set them apart as His people and His nation.

Or in other words, the Lord did that to make Israel distinct and different from other nations as they were unique – the chosen people of the Living God.

With that being said, are you ready for some Scripture from Leviticus that forbids consuming certain foods? Let’s go:

“It shall be a statute forever throughout your generations, in all your dwelling places, that you eat neither fat nor blood.”

“Moreover, you shall eat no blood whatever, whether of fowl or of animal, in any of your dwelling places. Whoever eats any blood, that person shall be cut off from his people.”

“And the pig, because it parts the hoof and is cloven-footed but does not chew the cud, is unclean to you.”

Something that God clearly puts an emphasis on in this list of forbidden foods is blood.

If you want to read more about this subject, head over to my post on Foods the Bible Says Not to Eat.

Does the Bible Forbid Eating Meat?

The Bible doesn’t forbid consuming meat as in Genesis 9 God gave humanity every moving thing that lives as food.

However, shortly after God created the first male and female in Genesis 1, He instructs His creation to eat a vegetarian diet.

Is this a possible contradiction? Not at all!

God gave us a vegetarian diet prior to the initial sin, but after that the Lord told Noah and his sons that they can eat meat.

And this is all part of our Creator’s progressive revelation of Himself to mankind.

Is Eating Meat a Sin?

Eating meat isn’t a sin according to the Bible as God gave every living thing as food for man in Genesis 9.

Not only that but our Lord and Savior Jesus Christ gave us the ultimate revelation regarding whether eating meat is a sin or not.

This is found in the gospels of Matthew (chapter 15) and Mark (chapter 7) where Jesus lets everyone know that it’s not what enters the mouth that defiles us, but what comes out of it.

It’s a common misconception and completely wrong interpretation of Scripture that God doesn’t allow us to eat meat.

God allowed us to eat every living thing (including animals) all the way back in Genesis 9 during the time of Noah.

And then during Jesus’ ministry, He let us know that it’s not the food that we eat that defiles us. It’s what comes out of our mouths – think foul speech, cursing etc.

Even more so, when Christ died on the cross He fulfilled the Old Testament law (Romans 10:4 ESV) and this includes ANY laws about unclean foods (e.g. pork from Leviticus 11).

Don’t forget that we shouldn’t twist God’s Word in any shape or form!

Remember the following passage from Paul’s inspired writings in the second epistle to Timothy:

“For the time is coming when people will not endure sound teaching, but having itching ears they will accumulate for themselves teachers to suit their own passions, and will turn away from listening to the truth and wander off into myths.”

Eventually, feel free to eat meat as it’s not a sin according to the Living Word of God – the Bible.