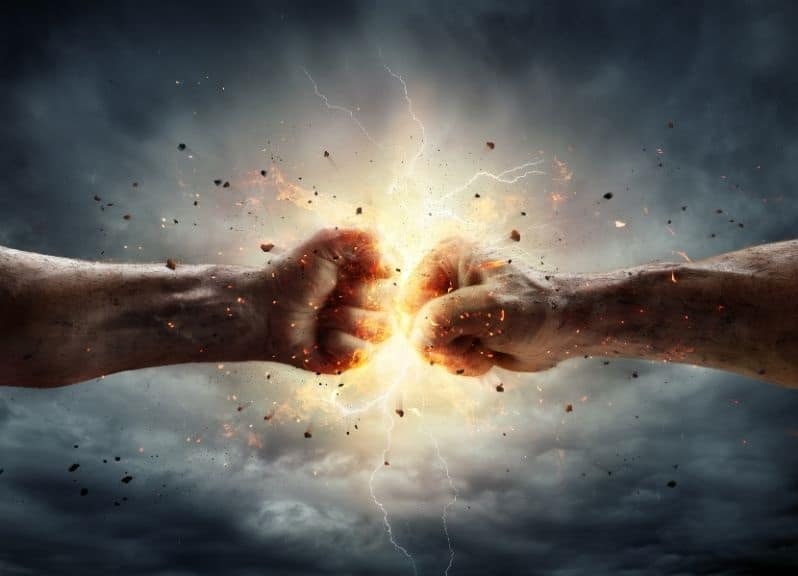 Have you ever seen Bible contradictions debunked? You’re about to see it happen right now.

Most Bible Contradictionists are so convinced the Bible is full of contradictions that they completely lose objectivity.

They become so blinded by their own errant belief systems that they can’t see how completely wrong they are.

So they write article titles like “Bible Contradictions That Cannot Be Answered.”

Another favorite title is “101 Clear Contradictions in the Bible”.

There’s even another one entitled “1001 Bible Contradictions!”

These days, there’s a lot of interest in the subject.

For some reason, there are plenty of folks who want to put down the Bible without taking the time to study it and find out if the Bible is really true.

It makes it easier to dismiss something when your mind is already made up.

That’s how many contradictions you will actually find in the Bible.

You will soon see how embarrassing and awkward it is for the contradictionists.

They paint themselves into a corner again and again.

Here’s a whole “List of the Biggest Contradictions in the Bible” I wrote up that’s been viewed many, many times.

It shows –in detail- how the contradictionists are dead wrong on every single apparent contradiction in the Bible.

After reading it, you’ll wonder what these guys were thinking when they started making these lists.

Why would these contradictionists put themselves in such an uncomfortable place?

It takes a little bit of effort to refute the lists that are put out by these people.

But if the truth is worth defending, it’s well worth it.

In this other post “Irrefutable Contradictions in the Bible” you can see how easy it is to debunk the first-ten-contradictions-in-a-row posted by one of these guys.

And if the first ten can be debunked this easily, is it even worth looking at the rest of them?

You’ll surely want to view these posts as soon as you can!

“Irrefutable Contradictions in the Bible”

“Bible Verses That [Don’t] Contradict Each Other”

So if you are hoping to find a thoughtful and detailed coverage of the subject, this is what you’ve been looking for.

It’s really surprising that people would make these lists without spending just a little bit of time to see if they got their facts straight!

And then other people copy the same lists from them and post them on the internet.

There are so many copies of these lists that you can’t even tell which one was published first!

But don’t worry. It’s super easy to refute all of the supposed Bible contradictions that cannot be answered.

Now you will soon see, step-by-step, how they dig themselves a deep pit and then fall right into it.

Contradictionists are generally sloppy and they just repeat what others have already written.

What’s incredible is that some of them seem to be quite intelligent people.

I don’t know why otherwise-intelligent folks would post something on the internet that is so easy to debunk.

But they do it again and again.

Sometimes I come across a special “Bible contradiction” that’s worth a closer look.

Why is it worth looking at? Because it’s so obvious this contradictionist is wrong.

He could have read the passages himself and saved himself the embarrassment of being so terribly misguided.

But apparently, he never even read them. How else could he have been so wrong?

It’s very interesting to try to enter into the thought process of the folks who are coming up with these contradictions to try to understand how they came to such an errant conclusion.

So let’s take a look.

This contradictionist found two scripture passages in the Old Testament.

These passages describe a time when King David was fighting the Philistines.

The Philistines had captured the Ark of the Covenant –but they returned it by putting it on an ox cart pulled by two cows after the Philistines started breaking out with tumors.

The ark was in Israel –but it was not yet in Jerusalem where it belonged.

Contradictionists (and this one in particular) claim these two passages contradict one another.

9) When did David bring the Ark of the Covenant to Jerusalem? Before defeating the Philistines or after?

You can see my original answer here.

I explain that in fact the contradictionist claim is false.

In both passages, David brings the Ark of the Covenant back to Jerusalem after defeating the Philistines.

This contradictionist claims that the order is reversed in 1 Chronicles compared to 2 Samuel.

We all know that a picture is worth a thousand words.

So let’s carefully read the passages in question and see for ourselves.

We can clearly read the passage where David pursues and defeats the Philistines.

He asks the Lord if He will give the Philistines over to him in battle. (2 Samuel 5:19)

In the same verse, the Lord answers that he will indeed hand the Philistines over to David in battle.

The story culminates with David’s defeat of the Philistines in 2 Samuel 5:25 that you can see bordered in red below.

Next, David brings the Ark to Jerusalem.

You can see it in the very same passage because the heading reads “The Ark Brought to Jerusalem.”

It’s highlighted in yellow right below the red circle.

First the Ark stays at the house of Obed-Edom the Gittite for a while after the incident that led to the death of Uzzah, but after a time, David clearly brings the Ark to Jerusalem in 2 Samuel 6:16.

So far, so good for the Contradictionist.

He’s rightly observed that David indeed brought the ark to Jerusalem AFTER defeating the Philistines in battle.

But how will he fare after the passage from Chronicles?

The contradictionist claims that the order is reversed in the passage from 1 Chronicles 13 and 14.

Let’s see if he got it right.

Here’s the passage. We can see –very clearly- that David defeats the Philistines in chapter 14.

The heading is in a red box for emphasis.

Then in chapter 15, he brings the ark to Jerusalem. Look for the yellow box.

The contradictionist really missed this one. Do we know why?

Well, you can see if you click on his link (above) that he never made any comments about why he thought the sequence was reversed.

He only asserts the reversed sequence.

But if we take a good look at this page, we can see there is a heading at the beginning of chapter 13 with the title “Bringing Back the Ark.”

Could that be his error?

Since he never made any analysis, we’ll never know.

1 Chronicles 13 repeats the story of 2 Samuel 5.  The whole story was already described above.

If it wasn’t crystal clear before, it is now.

Claims of Bible Contradictions are incredibly lacking in substance.

For contradictionists, it’s game over. For them, the Handwriting is on the Wall.

Now it’s time to take a whole new look at the Bible because it has proven itself over and over.

There’s a reason the Bible has been called “an anvil that has worn out many hammers.”

Now the Bible just wore out another hammer.