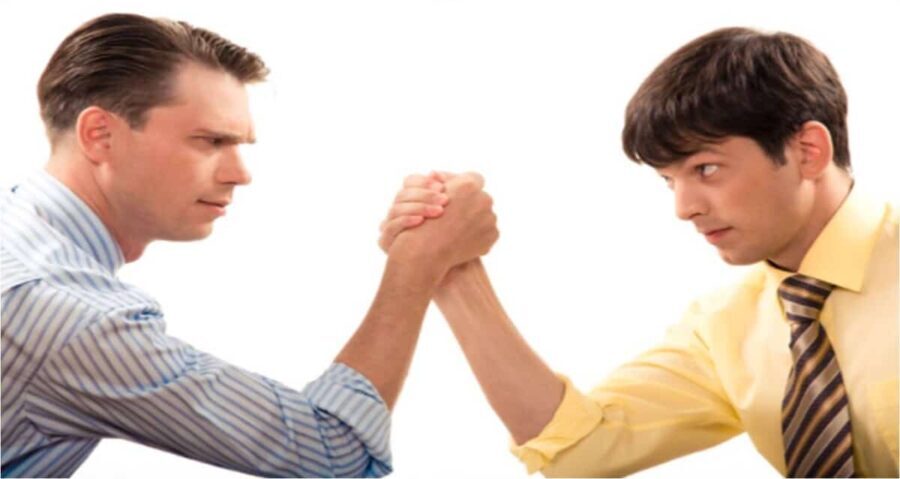 When you see lists of contradictions in the Bible posted on the internet, you typically see a group of rehashed claims that were debunked long ago.

But when you look through these claims, which number is right?

If you check, you will see all their lists are identical.

Did they all copy the same list? Or was one of them the author?

Since they offer no analysis, it’s easy to conclude they are just copying some earlier source.

Or is the real number 1001 Bible contradictions like you see here?

But 1001 is an odd number. Somebody else rounded off to a nice even 1000 Bible Contradictions here.

Another commentator says the number is really 300 contradictions in the Bible.

Somebody else even made a list of “Bible Verses that Contradict Each Other.”

Well, no matter the claim, many ask what the real number of contradictions is in the Bible.

It’s a great question to ask –especially nowadays when there’s so much interest in the subject.

The true number of Bible contradictions comes as a surprise to many.

And that’s how many contradictions you will really find in the Bible.

Contradictionists recycle the same old stuff that was proven false many years ago so they can –unfortunately- mislead a new crop of people with each new generation.

Contradictionists also make the error of not even knowing the definition of the word “Contradiction“.

They confuse contradictions with variations.

They are so confused they even claim there are “Bible Contradictions that cannot be answered.”

But with just a little bit of effort, it’s actually very easy for apparent Bible contradictions to be explained.

So how do you refute Irrefutable Contradictions in the Bible?

Simply show the obvious true answer next to the question, and show how flimsy their claims are. It’s that simple!

Let’s begin debunking false claims of Bible Contradictions by looking at the very first “Bible contradictions” on these copied lists mentioned above.

We’ll cover the first 10 contradictions on their list. If we get stumped, maybe we’ll have to admit they’re onto something, eh?

Well, that’s not going to happen.

Once you see how easy these are to debunk, you’ll see how awkward and embarrassing it is to the Contradictionists to leave these obvious errors online for all to see.

It isn’t even a fair fight.

1) Who incited David to count the fighting men of Israel?

We learn in other places in the Bible that God intends to work good things in the same situation where Satan (or man) is working to produce something bad.

“You intended to harm me, but God intended it for good to accomplish what is now being done, the saving of many lives.”

Solution: Both God and Satan incited David to count the fighting men of Israel.

God did it to humble David and make him better. Satan did it to destroy David

2) In that count, how many fighting men were found in Israel?

In this case we can refute two contradictions at once, so let’s look at the next one right away!

3) How many fighting men were found in Judah?

I covered these two “contradictions” in this other post –and I went into quite some depth on it.

Note: The Kingdom was unified under Saul, David and Solomon.But after that, it was divided into two kingdoms -the kingdom of Judah and the kingdom of Israel.

Here’s the short version of the story: There are two different Old Testament writers covering the same count of fighting men.

But they categorize the fighters differently. When you add up all the categories, you get the exact same total.

If you want to get the complete story with all the details, click here and take a look.

4) God sent his prophet to threaten David with how many years of famine?

Two possible explanations: 1) a copyist error 2) The prophet Gad mentioned in these passages might have approached David twice and God could have changed the number.

Bible scholars have known of copyist errors in the Bible for centuries. It’s no surprise to them.

There are exceedingly few such errors in the Bible, but these few are there to be found.

For many centuries before the printing press was invented, the only way to make copies was by hand.

And scrolls would wear out, necessitating their replacement.

Also, the difference between certain numbers –when written in Hebrew- is very subtle.

The most likely reason for this is a copyist error.

It’s substantiated by the fact that there are many manuscripts.

So scholars can compare and contrast them with one another.

A copyist error is not a contradiction.

5) How old was Ahaziah when he began to rule over Jerusalem?

This is clearly a copyist error. If Ahaziah were 42, he would have been older than his own father.

6) How old was Jehoiachin when he became King of Jerusalem?

You don’t have to be a Bible scholar to know the answer to this one.

Any regular student of the Bible can look at the footnotes in his own study Bible and see the answer.

Here’s a photo of the footnote on the page from my personal copy of the NIV Thompson Chain Reference study Bible.

It’s another rare copyist error, since we have many reliable manuscripts with each figure.

The Bible easily has the fewest errors and the most accuracy of any book in antiquity.

Now a question for Contradictionists: “What difference does it make if there are a few minor copyist errors in the Bible?

We all know the obvious answer. No.

7) How long did he (Jehoiachin) rule over Jerusalem?

One author decided to be more precise than the other. That’s all.

You have two slightly different viewpoints from two different authors.

Bible critics -when two books of the Bible agree completely- like to claim one author copied the other.

Here the two authors have a slightly different viewpoint and they claim a contradiction.

Some people are determined to disagree no matter what.

8) The chief of the mighty men of David lifted up his spear and killed how many men at one time?

A careful reading shows that there is approximately a 30-year difference between the two claims.

He raised his spear against 300 men at the beginning of David’s reign.

He raised his spear against 800 men and his exploits are recorded after the Last Words of David just a few verses earlier in the same chapter.

At the end of David’s reign he was an old man -and in no shape to fight. So his chief from 30 years prior would -by that time- have been replaced by a younger warrior.

When I say “a careful reading” all I mean is any reasonable person can simply read the passages and immediately come to the conclusion it is two different people.

You don’t have to have a degree in Biblical Hebrew.

An elementary school-aged child can read the passage and easily come to the correct conclusion.

The contradictionists embarrass themselves again and again.

9) When did David bring the Ark of the Covenant to Jerusalem? Before defeating the Philistines or after?

This is one of those places where it’s really awkward to be a contradictionist.

It’s one of those “contradictions” that makes you wonder if these guys even bothered to read the Bible before they came up with this stuff.

It’s downright painful to watch them do this to themselves.

Let’s take a look at these passages and see if they really contradict.

When reading 2 Samuel 5 and 6, it’s completely clear and straightforward that David brings the Ark of the Covenant to Jerusalem AFTER defeating the Philistines.

David begins bringing the Ark to Jerusalem, but only gets as far as the threshing floor of Kidon after the tragic death of Uzzah.

David leaves the Ark there, and AFTER he defeats the Philistines, he then brings the ark to Jerusalem.

The contradictionists are sloppy and factually wrong. You wonder if they even read the whole passage.

Here’s where you can see for yourself how easy it is to debunk this so-called contradiction.

10) How many pairs of clean animals did God tell Noah to take into the Ark?

b) Seven (Genesis 7:2) But despite this last instruction only two pairs went into the ark.

Genesis 6:19-20 refers to 2 of every animal. It never mentions the clean animals, so it’s obviously just about the unclean animals.

When we turn over to Genesis 7:2, we see God’s instruction to Noah to bring in 7 pairs of clean animals:

How much clearer can it get than this? The passage clearly says 7 pairs of clean animals and “a pair” (one pair) of unclean animals.

The Bible clearly tells them, but they can’t even tell the difference between clean and not clean when it’s right under their nose.

Is this an innocent error? Or something else?

When it’s this easy to see through it, you’ve just got to wonder.

And if it was this easy to refute every single one of the first 10 contradictions on their list, do we really need to go after the 91 others?

The answer to that is a clear and obvious “no.”