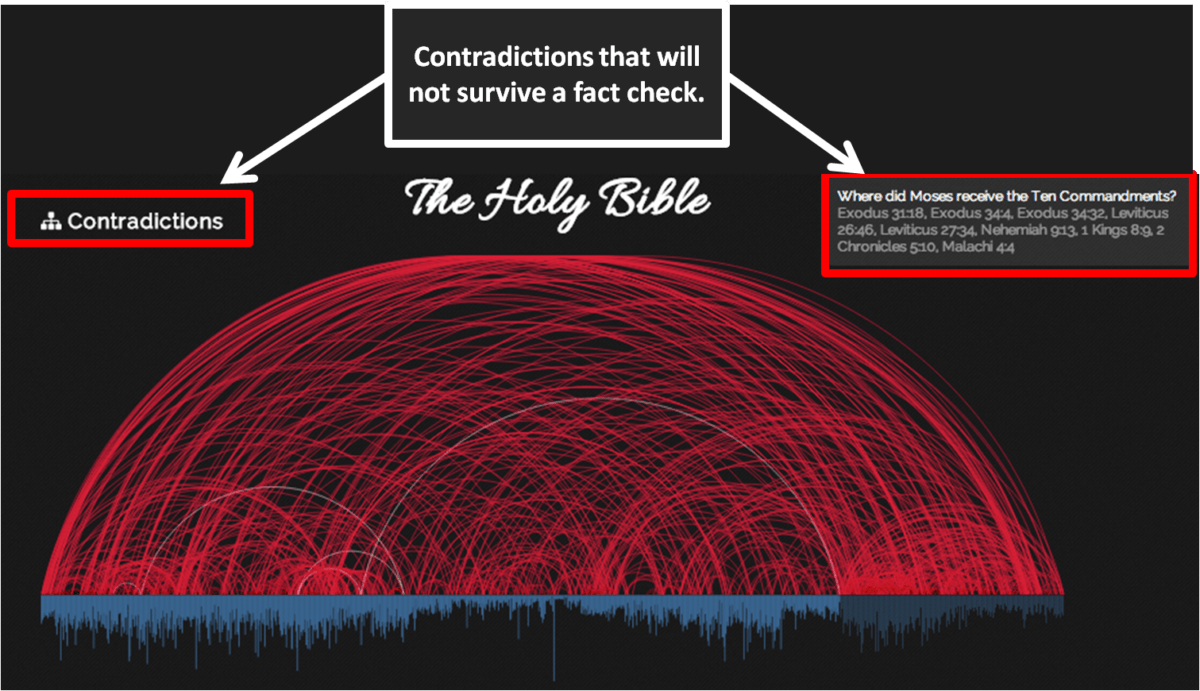 Have you seen this Bible Contradictions Chart posted on the internet?

Did you ever wonder how anybody could conclude the Bible had all these contradictions?

It’s designed to be fully interactive so you can click on it and see the different contradictions in the Bible.

But they missed something. And it’s a really big problem for Atheists.

We’ll get to it very soon.

It looks like it was done the same way we’ve seen all the other Bible Contradictionists do it.

That’s why they’re always wrong. They’ve yet to prove a single real Bible contradiction -and here’s why:

(1) They seem to have made assumptions based on preconceived notions.

(2) They appear to have accepted their preconceptions uncritically with no use of logic or reason.

(3) They apparently never considered any other possibilities or other evidence –including opposing evidence.

(4) It looks like they didn’t even engage any experts in the field.

(5)There’s no indication they even read the Bible verses they cited to see if they made sense.

(6) Finally, there’s little evidence they did any research to back up their claims.

So all they’ve got is a flimsy assertion based on blind faith. So flimsy that it’s super easy to lay bare the errors and inconsistencies -as you will soon see.

You wonder why they would risk the shame, humiliation and embarrassment of being so wrong.

It would have been so easy to get it right if they’d just done a little homework.

The truth –as you will soon see- is that the contradictionists succeeded only in fooling themselves and –maybe- leading a few of their most naïve and credulous readers astray.

How did they do this to themselves?

It’s represented pictorially with a series of curved lines between each Old Testament reference and its New Testament complement.

It’s visually stunning –and it beautifully shows how closely the Old and New Testaments are interconnected.

Not only that, but it includes every single cross-reference in the Bible!

So it includes not only cross-references between Old and New Testaments, but also all the intra-testamentary references.

It’s every bit as thorough as it is visually appealing.

You can see the original Bible References Visualization here.

Chris and his team are world leaders in the field of Computer Science at a major, highly respected university.

Their work is a spectacular achievement in Bible Visualization that takes very important data and represents it in a way that is graphically relevant and magnificent.

Students of the Bible know there are beautiful harmonies that link the Old and New Testaments.

And what a great way to see it graphically!

These harmonies show us God’s wisdom, foreknowledge and love for all people.

They support the faith of sincere Bible students and give us good reasons to share our authentic faith with others in a lost and dying world that desperately needs hope.

So along comes some other guy – a computer graphics whiz.

He has the idea of making a similar chart –but this time he just includes references related to “Bible Contradictions.”

So that’s the short story of how the infamous Bible Contradictions Chart showed up on the internet.

But for him, there’s a problem.

And it’s a big problem.

Where are all the contradictions?

A critical analysis of the so-called Bible Contradictions reveals the soft underbelly of the original contradictions claim.

Because –as has been shown here and here and here– the true number of Bible Contradictions is –in fact- Zero.

Zero. That’s the real number of Contradictions in the Bible. Yes, Zero.

And the Contradictionists made it insanely easy to prove.

Right on the graphic, they show a list of supposed Bible Contradictions that reveals their profound lack of understanding.

And when we say profound, what do we mean? Well, here’s a great way to explain it.

Their lack of understanding is very extreme.

What if they made a reference to the number of innings in a football game?

What would you think of them?

What if they tell you somebody won a tennis match by the score of 103-98, now what would you think?

Or what if they said the winner of the Kentucky Derby won with a Ford Mustang?

You would really be scratching your head, wouldn’t you?

You would be scratching your head because there’s a big problem of logic in each of these statements.

And that’s how tone-deaf they are about so-called Bible Contradictions.

All we need is to take a quick look at the list of Bible verses. It only takes a minute to see their glaring error.

Good thing they listed out the verses, so it’s easier to fact-check them. They even put the same list on the graphic.

Note the heading: There are two columns.

The claim here is that the left column says Moses received the Ten Commandments at Mt. Sinai.

Can you see the problem? While the verses quoted in the right-hand column say “Horeb” they never say “Mt. Horeb.”

Scholars have known this fact for centuries. Actually, they’ve known about it for Millennia, since Moses received the Ten Commandments around 1300 BC -a full 3,300 years ago!

And they tell us Horeb is a large general area where you can find Mt. Sinai.

In other words Mt. Sinai is located in Horeb –and you can click here to learn more about it.

It’s like saying Pikes’ Peak is in the Rocky Mountains.

You get the picture.

And it’s right under The “Friendly Atheist’s” nose.

But -for them- as if it isn’t bad enough already -it gets even worse!

You’d think the computer graphics whiz who made the Bible Contradictions chart would know better.

Every computer nerd knows this famous computer saying: “Garbage In –Garbage Out.”

It means you could do a splendid job of computer programming, but if you feed garbage in, you’ll get garbage out.

And that’s exactly what we’ve got here. GIGO.

Bible Contradictionists are notorious for ridiculing the Bible.

And that’s why they look so bad when they try to criticize it.

They fail –again and again- to look at it honestly and fairly.

And it’s easy to see why.

Many Bible Contradictionists are Atheists. If they looked at Atheism fairly, they would have to admit something.

Atheism has caused the most death and misery in world history.

Atheism killed more people in the 20th century than any other cause.

At least 94 million were killed by Communist governments in that bloody century. And communism is an Atheistic ideology.

Atheism caused more wars and more slavery and discrimination and and took a devastating human toll more than any other ideology.

You thought this was worse already. But we’ve barely started.

Atheism is fundamentally flawed. If Atheism is really true, then good and evil don’t exist.

Good and evil only exist because of a moral standard by which to measure them.

So Atheists – claiming there is no God, use morality that comes from God to try to disprove the existence of God.

Talk about being all knotted up.

Atheists try to use Moral standards to argue against Christians, but the argument blows up in their face because Atheism has to steal that moral standard from the Bible.

They are cutting off the very branch of the tree that they are sitting on.

As if it wasn’t bad enough for the Atheist, it got even worse still.

The basic belief of the Atheist –their belief system itself- is so deeply flawed and illogical that it actually takes more faith to be an Atheist than to be a Christian.

Atheism takes way more faith than I’ve got. That’s for sure!

It’s such an important matter that Frank Turek wrote an entirely different book on the subject.

You can click here to take a look at “I Don’t Have Enough Faith to be an Atheist” by Frank Turek and Norm Geisler (Amazon link) to see for yourself.

If there’s a group of people with beliefs that are more illogical than Atheism, I have yet to see it.

And that’s probably why they fail so badly at Bible Contradictions.

Is this why so many prominent thinkers have become ex-atheists?

Logic is a creation of the God of the Bible. We can see that the Universe itself follows the laws of nature.

And laws can only come into existence by the will of a lawmaker.

This is the big reason arch-Atheist Antony Flew gave for leaving the religion of Atheism.

This brilliant ex-Atheist had given Philosophy majors fits for over five decades.

He was the only Professor able to organize atheism into a coherent philosophy. Those poor philosophy majors had to study his writings.

How do you suppose they all felt after Dr. Flew walked away from the bankrupt religion and philosophy of Atheism?

The extreme fine-tuning of the universe and the amazing irreducible complexity of the human body with it’s 3.5-billion-character DNA sequence arranged in a code was all it took for Dr. Flew to throw away those five decades down the rabbit hole of atheism.

You can take a look at Antony Flew’s book on Amazon “There is a God -How the World’s Most Notorious Atheist Changed His Mind” to learn more about his journey.

Wherever we see a code, we know there was a code-writer.

There’s never been a code written without a code-writer.

And the very first verse of the Bible reveals the identity of the code writer:

“In the beginning, God created the heavens and the earth.” Genesis 1:1, ESV