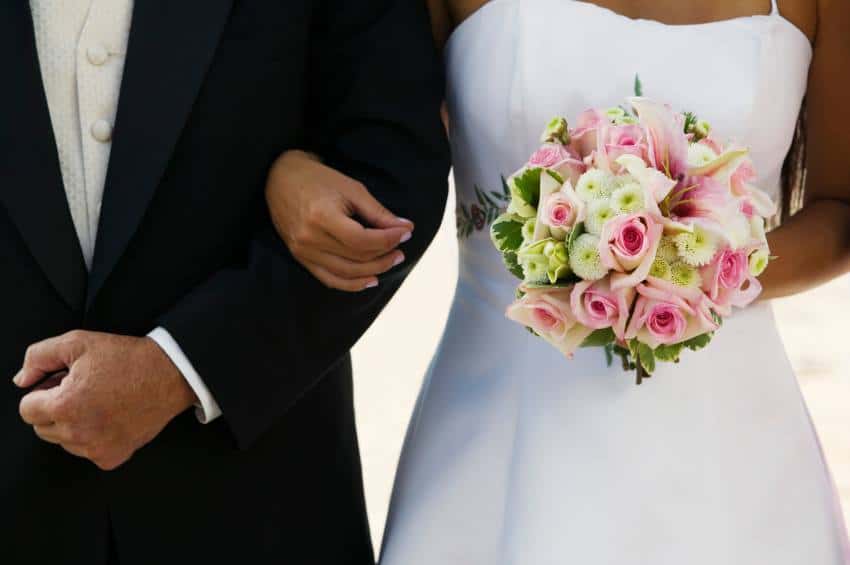 It happens every few years.

Some new researcher finds stunning evidence Jesus had a wife in the Bible.

So who was Jesus’ wife in the Bible? For some reason, Mary Magdalene is always the most popular candidate.

Mary of Magdala came from the village of Magdala in the region of Northern Galilee.

We know her as Mary Magdalene. Her last name is really a place name.

That’s how it was in those days before people took on surnames.

Like Paul of Tarsus or Jesus of Nazareth. This naming convention told where you were from.

But who was Mary Magdalene to Jesus?

She became a follower –and even a disciple- of Jesus after he cast seven demons out of her.

…and also some women who had been healed of evil spirits and infirmities: Mary, called Magdalene, from whom seven demons had gone out…

But there’s a problem for the researcher.

The story of wedded bliss between Jesus and Mary Magdalene never came from the Bible.

And it never happened.

But the Bible tells us of a love story that is much more wonderful. Because Jesus has a wife in the Bible.

Truth is stranger and more wonderful than fiction any day. And this story is way better than any of man’s made-up stories.

Most of these researchers either don’t read the Bible or they discount what the Bible says.

Too bad for them and their readers.

It follows a pattern I’ve seen more than once. It’s almost always some “new finding” from a previously unknown researcher.

It may come from some new archaeological dig, or some “lost” book of the Bible that was “recently discovered.”

There’s a never-ending supply of uninformed consumers of media content.

And plenty of content creators smell an opportunity to make a name for themselves.

So it’s only a matter of time before the story -or some variation of it- comes around for another look.

Again and again, the sensational details seem amazing at first, but upon inspection they always break down.

You end up learning the researcher made some big mistake.

Sometimes they admit it –and quietly go away. Like Harvard Divinity Professor Karen L. King.

She finally had to admit the document she discovered was likely a forgery.

Others just sell as many books –and collect as many royalties- as they can before they run out of buyers.

Like Simcha Jacobovici, author of the ill-fated “The Jesus Tomb” that –oddly enough after it was completely refuted- can still be viewed on Amazon years later.

Here –in a nutshell- is the story:

Archaeologists discovered ossuaries (stone boxes with bones of dead people) in a tomb with names engraved on them.

Some of the names were Jesus and Mary and James and Joseph. It was easy to assume these could have been the bones of Jesus Christ and his family!

Oh what an amazing blockbuster of a story it would have been if it were true!

But this tomb was way too far away. And the probability of there being multiple people with these combinations of names in one extended family was too great.

In Israel -in AD 33, there were many men named Jesus and many women named Mary.

When all the details finally came out after a lengthy scholarly analysis, the whole thing totally unraveled.

But not before Jacobovici sold a lot of books and created many video episodes of the Naked Archaeologist.

Respected scholars usually take longer to dismantle the dubious claims than the authors of the sensational narratives take to rush their books to market.

Careful analysis always takes more time than a rush to publish something with half the story left out.

Jacobovici sold quite a few books before the sand ran out of that hour glass.

Every time this kind of thing comes around, there’s a familiar tone to the narrative. They say the church knew all along that Jesus had a wife, but covered it up.

-Or the church purposely left a few books out of the Bible with the “real” story.

-Or some Pope or Priest said something wrong 1500 years ago –in a time when the literacy rate was 15% and Gutenberg hadn’t yet come along to invent the printing press- causing us to all misunderstand.

Hard evidence is always hard to come by. But all they have to do is read the Bible to find out what happened.

When you consider that most of the eyewitnesses to Jesus’ death, burial and resurrection eventually paid for that knowledge with their lives, you can know that the Bible’s true stories are well-supported.

Did Jesus Have a Wife in the Bible?

The surprising thing the sensationalists miss is Jesus always had a bride. And he still does.

She’s been there for a long time. But she isn’t Mary Magdalene.

He’s been writing her love letters and sending her flowers for thousands of years.

The true story is better and more interesting than the counterfeit any day.

If you don’t know where to find the bride of Jesus Christ, you soon will. She’s much too important to not know.

It’s a romantic story you won’t want to miss!

She’s been mentioned multiple times in both the Old Testament:

and as the bridegroom rejoices over the bride,
so shall your God rejoice over you.

My beloved speaks and says to me: “Arise, my love, my beautiful one, and come away,

and the New Testament:

Let us rejoice and exult
and give him the glory,
for the marriage of the Lamb has come,
and his Bride has made herself ready;

For I feel a divine jealousy for you, since I betrothed you to one husband, to present you as a pure virgin to Christ.

We know a thing or two about her character and the love between her and Jesus from the verses above.

If the folks who keep looking for Jesus’ wife would just look, they could find her quickly right in the pages of the Bible.

We know from the Song of Solomon that it is good to wait for the right time to engage in marital love.

Do you think the Son of God knows how to wait for his bride? The testimony about him is that he was totally without sin.

Of course he knows how to wait for the right time!

Why Did Jesus Appear to Mary Magdalene at the Tomb?

We learn that Jesus appeared to Mary Magdalene at the tomb from John 20.

She was the first to see that the tomb was empty.

She was also present at the cross.

Most of Jesus’ male disciples (except John) skipped the scene at the cross. It wasn’t very heroic of these men.

But Mary Magdalene stayed close by her savior’s side at a very difficult time.

Scholars tell us Jesus’ appearance to a woman rather than a man is evidence of authenticity.

If the story had been made up, it probably would have cast the men as heroes.

Men held all the power and credibility in antiquity. Women did not get the full rights of men until Christianity got well-established for many centuries.

Since the record shows the men to have been cowards at the Crucifixion and heroes after the Resurrection, it is evidence –along with other embarrassing details– that these events really occurred.

And there’s another interesting angle to consider.

Isn’t Jesus’ appearance to Mary Magdalene at the tomb a prophetic foreshadowing of his meeting with his true bride –the church- at a later date still to come?

This is what quite a few respected scholars say. Mary Magdalene stayed with her Lord with a steadfast faith at a very, very difficult time.

Her faith was true. This is the kind of faith we the church-and-bride-of-Christ should also be able to display in our times of testing and trouble.

You see, Mary of Magdala displayed the character of the Bride of Christ. She was always staying close to her savior.

Isn’t that the character we should all have?

Why is the Gospel of Mary Magdalene not in the Bible?

The true books of the New Testament are easy to tell from others.

They were all written by authors closely associated with the people and events that took place around Jesus and the Apostles.

They were all written in the 1st Century. The authors are all well-known, with the possible exception of the book of Hebrews.

They all involve eyewitness accounts.

The Gospel of Mary Magdalene is none of these.

In fact, no other books besides the accepted books in the Bible come anywhere near close enough to even be considered.

So whether they are Gnostic Gospels or any other kind of apocryphal works, they don’t’ pass muster.

They come at much later dates, or in the case of the Apocrypha, they were known but never accepted as canonical.

Did Jesus Have a Wife in the Bible?

For sure, Jesus does indeed have a wife in the Bible.

She’s the One he bought and paid for with his blood.

He is a very fine groom.

And he is coming soon to get her. The marriage feast will be a great time for both bride –the church- and the groom!