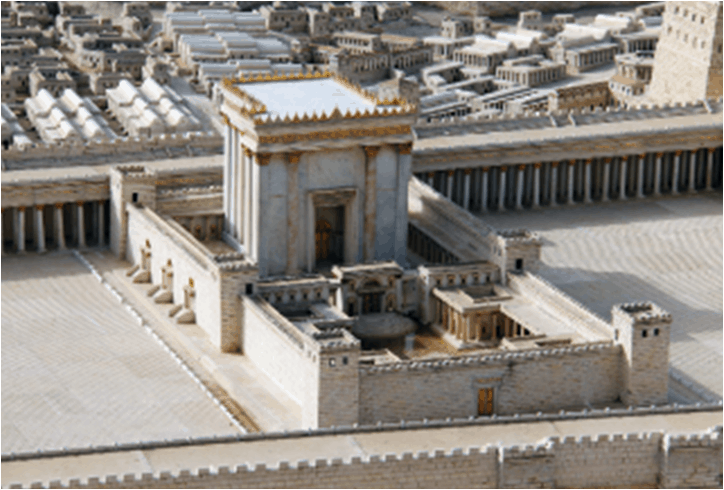 Christianity began in AD 32 in and around Jerusalem in Judea immediately after the death, burial and resurrection of Jesus Christ.

Jerusalem and Judea are the heart of modern-day Israel.

The early Christians were a small group of mostly Jewish people and a few gentiles who followed Jesus.

It had become clear to them that Jesus Christ fulfilled a large number of Messianic Old Testament prophecies.

As they carried on his teachings across the Roman Empire, Christianity spread steadily.

It’s important to note that the rise of Christianity did not occur in some out-of-the-way place.

It did not start with the earthly birth of Jesus Christ.

Jesus Christ is the second person of the Trinity, so he has always existed.

He is the Alpha and the Omega, the first and the last, the Beginning and the End.

Christianity did not start in some faraway location.

It did not start in a secondary place where some homespun sect might have started their own thing.

It wasn’t at some remote locale that was out of contact with mainstream Judaism.

Rather, it began right in Jerusalem, at the geographical, cultural and religious epicenter of the Jewish faith.

This allowed Christianity to be directly compared and contrasted with the Jewish faith.

There are many details as to how Christianity originated and spread.

Let’s take a more in-depth look into the beginning of the faith that changed –and blessed- the world in so many ways.

Where Did Christianity Originate Geographically?

Christianity began in Judea (Jerusalem) in the first century AD.

It started after Jesus’ faithful disciples spread his word once he had died, been buried and resurrected on the third day.

Jesus presented himself as the Messiah on Palm Sunday and throngs worshipped him as he rode his donkey into the city.

By so doing, he fulfilled the prophecy written by the Old Testament prophet Zechariah 550 years earlier:

“Rejoice greatly, O Daughter of Zion! Shout, Daughter of Jerusalem! See, your king comes to you, righteous and having salvation, gentle and riding on a donkey, on a colt, the foal of a donkey.” Zechariah 9:9, NIV

Jesus fulfilled many prophecies through his life, death, and resurrection.

He fulfilled the prophecy that the Messiah would be known as a Nazarene.

He would come out of Egypt, and yet he would be born in Bethlehem.

Bethlehem was the place where the lambs were raised for the temple sacrifice two miles away in Jerusalem.

Then when they crucified him, they put the inscription known as INRI on the cross –thereby fulfilling yet another major Messianic prophecy that the Messiah would be known as King of the Jews.

On the 50th day after his resurrection, Peter and the other apostles were filled with the Holy Spirit on what would become known as the Day of Pentecost.

This coincided with the Old Testament feast of Shavuot, but in the New Testament we call it Pentecost.

As he was filled with the power of the Holy Spirit, Peter gave what is acknowledged to be the first public sermon of the Gospel to a large group in that city since the Resurrection.

In the Old Testament, the people rebelled when Moses delivered the law on Shavuot and 3000 fell.

In the New Testament, 3000 people were added to the church in one day on Shavuot (Pentecost) and given new life! (Acts 2:41)

Where Did Christianity Originate Spiritually?

Christianity’s spiritual origins are rooted in the Jewish faith.

Though Jesus was from Galilee, he was of the Messianic line –the line of David.

This is why Joseph and Mary had to travel to Bethlehem for the census. It was the hometown of David.

Bethlehem was the same place a young David raised sheep and rescued them from the Lion and the Bear.

Christianity and the teachings of Jesus did not come from left-field.

They are inherently Jewish, as before the coming of the Messiah.

Abraham, Noah, Moses – these men of the Old Testament were set apart for the Lord to show his plan of salvation to the nations.

When Jesus began his spiritual teachings, he did not introduce a new Deity but showed the fulfillment of the promise.

Where Did Christianity Spread To?

Christianity quickly spread around the entire known world. Just as Jesus had commanded his followers in Matthew 28:19-20:

19 Go therefore and make disciples of all nations, baptizing them in[a] the name of the Father and of the Son and of the Holy Spirit, 20 teaching them to observe all that I have commanded you. And behold, I am with you always, to the end of the age.”

It began by spreading through the Roman Empire through the diligence of the loyal and energetic disciples of Jesus – the most prolific of which was Paul.

He took the Gospel message straight to Rome and straight to the most powerful and influential people in the palace of the Emperor.

Thomas took the Gospel all the way to India, and other disciples and their followers spread the gospel far and wide.

Some went to Africa. Others went to Asia Minor. Still others went throughout the Roman Empire.

Today the Gospel is still being preached around the world to every tongue and every ethnicity as Christians work to complete the Great Commission.

The earliest Christians did not name themselves Christians.

Instead they called their movement “The Way” as referenced in a number of New Testament scriptures you can see here –mostly in the book of Acts.

The word Christian was first used as a pejorative term by critics of the movement who wanted to put it down.

“Christian” means “little Christ.” So it was a put-down to those who followed the risen Christ.

Why Jesus’ Followers Were Called Christians

When Jesus began his journey and teachings, the people who followed him usually referred to themselves as followers or even Saints.

The new movement met a lot of resistance in Antioch. This is probably why this term “Christian” originated there.

The word “Christ” is the Greek translation of the Hebrew “Messiah.” It means the anointed one.

Christ is the savior of Israel –the One who was mentioned many times by the Old Testament prophets.

In English, “Christ” is a transliteration of the Greek word “Christos.” Here’s how “Christos” looks in Greek:

The people of Antioch took this word Christ and called Jesus’ followers by a name closely related to him.

Calling them “Christians” loosely means “little Christs.” The followers of Christ were now called by his Messianic title –but in the Greek language.

So the term “Christian” was born.

They were very literally saying they were those who had belonged to the group that Jesus had led and that they were living like him.