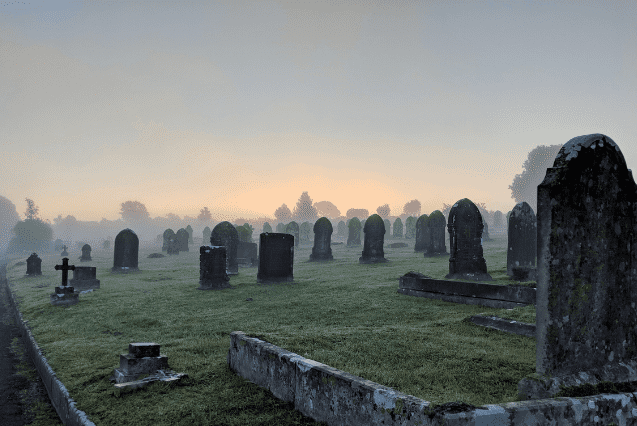 Does the Bible say “let the dead bury the dead”?

Yes, it does. And what’s more amazing is the identity of the speaker. Who said “let the dead bury the dead”?

It was Jesus Christ Himself.

Why would He make such an unusual statement? And what is the true meaning of “Let the dead bury the dead?”

The man Jesus Christ was speaking to was telling Jesus that the cares of this world were more important to him than the kingdom of God. And Jesus was telling him which was the better choice -and what the wrong choice meant.

In order to really understand, it’s important to study the context.

Let’s also consider the audience and the meaning of the term “let the dead bury the dead” in 1st century Israel.

When we really begin to understand it, this phrase makes so much more sense.

In this article, you can see the detailed Scripture-based answer as to what exactly Jesus meant when he said “let the dead bury the dead.”

What Jesus Meant by Let the Dead Bury the Dead

Jesus said “let the dead bury the dead” in Luke 9:59-60 and Matthew 8:21-22 to emphasize the spiritual death of worldly people.

But before we dive deeper into the meaning behind these words spoken by the Messiah, it’s important to put things into context.

In Luke 9:59 and Matthew 8:21 Christ gave a simple instruction to a man He encountered along the road – “Follow me.”

These are the exact same words that Jesus spoke to Matthew who actually did follow him (Matthew 9:9 ESV).

But not this unnamed guy.

Instead of following Christ, he replied with “Lord, let me first go and bury my father.”

Maybe you’re thinking – “this man will simply go and bury his father, then he’ll come back to become a disciple of Jesus in a few hours –or maybe a day or two, right?”

That’s not at all what this man meant.

During Jesus’ earthly ministry, people used the expression of “going to bury their own father” to say that they wanted to remain with their father until his end.

This could take years. Even decades… Or in other words, it means being near their father in order to obtain their inheritance.

So the father of this fellow was probably still in the prime of life.

Do you now see what this man actually meant when he said that he wanted to bury his father before following Jesus?

That’s right – he wanted to enjoy more of what this life offered before committing to becoming a disciple of our Lord and Savior. And it isn’t any different in the KJV or any other translation.

Instead of denying himself and taking up his cross to follow Jesus, this man preferred to enjoy the pleasure of sin for a season.

It’s safe to say that this man wanted to have a bit more fun while he was alive before following Christ, because he most likely knew what it meant to be a disciple of Jesus.

After all, remaining in sin and following Jesus are like oil and water – they don’t mix.

You’re either all-in or you’re like this man who wanted to have just a little bit more fun on Earth before focusing on eternity.

In a sense, it’s like people who say “I have enough time, I’ll think about God when I’m old”. This is pure foolishness.

None of us is promised tomorrow and we don’t know what tomorrow brings. Our lives are nothing but mist that appears for a little while and then vanishes (James 4:14).

By saying “let the dead bury the dead”, Jesus is clearly speaking about individuals who are spiritually dead.

But you might be wondering – who are the spiritually dead?

These are all the unsaved people who are not interested in the free gift of salvation through faith in Christ.

These are those who value the treasures of this world more than eternal life.

And they are all around us. Like the the dead people the little boy could see walking all around him in “The Sixth Sense” movie.

So when Christ told this man to leave the works of the (spiritually) dead and follow Him, He was implying that there’s something of greater importance.

But hey – this doesn’t mean that we shouldn’t honor our father and mother! It just means that our number one priority should always be Jesus Christ.

Our Walk With Jesus is the Most Important Thing

As our top priority, following Christ means that we shouldn’t love our family and even ourselves more than we love Jesus (Luke 14:26 ESV).

But we have to remember that the Living God is a jealous God (Exodus 20:5 ESV) and we can’t afford to be lukewarm.

The person who wanted to bury his father first was clearly torn between eternal life and temporal, secular life. Note that he didn’t decline Jesus’ offer to follow Him, so he must’ve been at least interested in doing this.

But he had an excuse to not follow Him right away, but wait until he buries his father first.

We’re in the same boat.

We have only one lifetime to get right with God –one life to accept Jesus Christ as our Lord and Savior to inherit a thrilling eternal life with him.

Otherwise we’re destined for the fiery pit of hell by default.

And no, we can’t have any excuses for waiting any longer before we put our faith in Jesus. You might die at any minute, any second.

Don’t provoke the Lord and don’t assume that just because you’re not that old, you still have plenty of years in front of you (like-for example- this young guy).

Confess with your mouth that Jesus is Lord and believe that God raised Him from the dead to be saved, now (Romans 10:9 ESV).

If you haven’t done this already, do it NOW… while you still can.

Don’t be like that man from Luke 9:59 аnd Matthew 8:21 who wanted to have some more time on this Earth before following Christ.

There’s nothing in the Bible telling us he ever came around a second time. And you know what that means.

The exact words “let the dead bury the dead” spoken by Jesus are recorded on two occasions in the Bible, both in the New Testament – in the gospels of Matthew and Luke:

To another he said, “Follow me.” But he said, “Lord, let me first go and bury my father.” And Jesus said to him, “Leave the dead to bury their own dead. But as for you, go and proclaim the kingdom of God.” Yet another said, “I will follow you, Lord, but let me first say farewell to those at my home.” Jesus said to him, “No one who puts his hand to the plow and looks back is fit for the kingdom of God.”

Another of the disciples said to him, “Lord, let me first go and bury my father.” And Jesus said to him, “Follow me, and leave the dead to bury their own dead.”

Once again, the emphasis here is on spiritual death.

Jesus is referring to spiritually dead people (those who love this world more than Him) and He isn’t implying that we shouldn’t honor our parents.

He is simply highlighting the fact that Christ is our top priority.

Do you know what Jesus says about our default spiritual state?

“And you were dead in the trespasses and sins”

We are dead in our sin, not physically but spiritually.

And if we die (physically) while we’re still spiritually dead in our default sinful state, we’re actively choosing hell. (See my post “How Long Does Hell Last?”)

Remember these words of Jesus as recorded by Apostle John:

God is just and He cannot tolerate sin – this is why hell exists.

In fact, we’re spiritually dead without Christ but this spiritual state can be changed by believing in Him.

Otherwise we’re all appointed to die once and then we’re judged by our Creator (Hebrews 9:27 ESV).

Being a dead man walking (from a spiritual perspective) as a consequence of sin is a theme that appears throughout Scripture, including the Old Testament.

One of the best examples of spiritual death due to sin in the OT comes from the very beginning:

“But of the tree of the knowledge of good and evil you shall not eat, for in the day that you eat of it you shall surely die.”

Again, the emphasis here is on dying on the inside – your spiritual side.

Adam and Eve didn’t immediately die after they ate from the forbidden fruit.

They continued living, although they were already destined for judgment due to sinning against the Most High.

And we inherit this initial sin from our parents, which means that each and every one of us is born as a spiritually dead human being.

We have this sinful nature within us that is inherited from the first man and woman who committed the original sin.

Because of our absolute depravity, we’re destined for hell if we don’t believe in Jesus.

Eventually, when Jesus used the words “let the dead bury the dead” He solidified several important truths about our walk with Him:

The unnamed man who Jesus commanded with “follow Me” was simply looking for excuses to enjoy the sinful pleasures of this world for a bit longer.

He clearly wanted to follow Christ, but he also wanted to have some more fun while he was still alive.

But this lukewarmness is exactly what the Lord despises.

Remember what’s written in Joshua 24:15 ESV – “choose this day whom you will serve”.

None of us can serve two masters (Matthew 6:24 ESV), so surrender your heart to Jesus today to become a born-again, spirit-filled Christian whose iniquities were washed clean by the blood of the Lamb (Revelation 7:14 ESV).