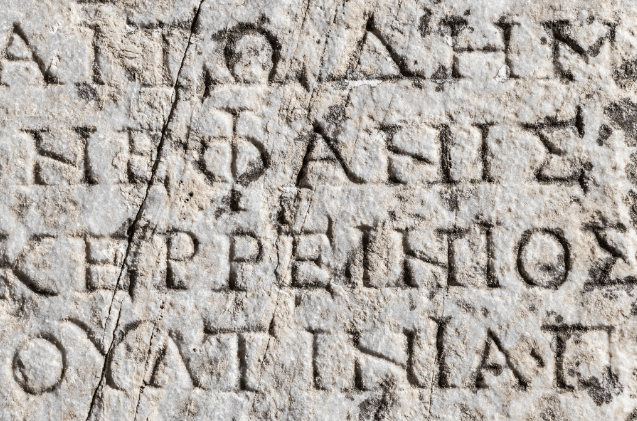 It’s a surprise to many to find out that the Bible wasn’t written all at once. It was written over the course of many centuries by over 40 different writers.

Another surprise is the answer to the question of “What Language Was the Bible Written In?”

We are so used to English being the most popular world language. But this wasn’t always the case.

There have been other world languages in the past, as we will discuss very soon.

Some small portions of the Old Testament were also written in Aramaic –a Hebrew-based everyday language spoken in Israel.

You can see an example in this other post I wrote called The Handwriting on The Wall, in which the words on the wall were written in Aramaic.

The English expression “Handwriting on the Wall” comes directly from this Bible passage in the book of Daniel, and expresses a foreboding message of doom. This saying became a part of our language straight from the pages of the Bible!

But there’s so much more to the story about the written language of the Bible.

How Many Languages is the Bible Written in?

It’s generally accepted that the original Biblical texts were written in 3 languages:

The New Testament was written in Koine Greek with a few occasional Aramaic phrases like “Eloi Eloi lama sabachthani?” that Christ uses from the cross.

However, note that Hebrew and Aramaic are considered sister languages. Think of Spanish and Italian – extremely similar.

Basically, if you know Hebrew, learning Aramaic would be a walk in the park and vice versa.

So one may argue that only 2 languages were used, but technically the Bible was written in 3 languages.

Why Was the Old Testament Written in Hebrew?

The Old Testament was written over a period from about 1500 BC until about 400 BC.

Every Old Testament writer was from Israel, and Hebrew was the language of Israel.

That’s exactly why the Old Testament was written in Hebrew – because this was the written and spoken language of the authors of all 39 Old Testament books.

The Hebrew language is an offshoot of Proto-Semitic that was likely the language spoken by Adam and Eve.

This form of Semitic that was preserved in Hebrew shares a lot of similarities to the Semitic language.

However, the term Hebrew that we use to describe the OT language isn’t found in any of the 39 Old Testament books. Instead, we find Scripture referring to the language of the Jews as:

While in the New Testament John the Apostle refers to Hebrew as we know it today in his inspired writings about the end times (Rev 9:11; 16:16 ESV).

Although Hebrew has a somewhat simple vocabulary, the Old Testament authors really displayed the beautiful and rich metaphoric side of this language.

And they also wrote Old Testament Scripture in a right to left fashion, which is the standard writing system for Hebrew (in contrast to English in which we write left-to-right).

Why Was the New Testament Written in Koine Greek?

In our day, we say English is the lingua franca of the world. It’s a way of saying it’s the world’s standard –the most important language in the world.

And so it was with Greek in the time of Christ.

When people ask “What Language Was the Bible Written In?” that’s a good basic answer.

Greek had been the world’s lingua franca since even before the time of Alexander the Great, 250 years earlier.

And that is the primary reason why the New Testament authors picked the Greek language. It was the obvious choice.

And as it turned out -it reached a broader audience that included the Gentiles (people not from Israel).

Just as Jesus did, New Testament authors wanted to share the good news of salvation with everyone, Jew and Gentile.

And what better language to choose than Greek, which was the common tongue used in Palestine during the Roman Empire?

In fact, Koine Greek (a form of Greek) was the most widespread language in the eastern Mediterranean region at the time and alongside Latin, it was the official language of the Roman Empire.

Note that “koine” means “common”, hence Koine Greek’s popularity. It was the Greek language of the common people.

This Greek dialect was quite popular from the time of Alexander the Great until even after the death, burial and resurrection of Jesus Christ.

Koine Greek even continued to be widely used after the Western Roman Empire fell, especially in big cities like Antioch and Alexandria.

But in the New Testament period, being able to effectively speak in Greek was a very important skill to properly communicate and carry out business.

The Jewish scholar and historian Flavius Josephus noted that speaking Greek was a common thing among both slaves and servants in this part of the world.

As a result, early church members utilized this language as their communication tool to reach out to people from different parts of the Earth whose native language wasn’t Hebrew or Aramaic.

The New Testament records our Lord and Savior Jesus Christ Himself using two Greek words that describe love as recorded in John 21:15-17 ESV.

There, Jesus uses the words agape (deep love) and phileo (brotherly love toward someone) while speaking to Simon Peter.

Interestingly, none of these words have an exact word-for-word match in either Old Testament Hebrew or Aramaic.

Why is Jesus Called Son of David?

Jesus’ Many Blatant Claims to be God

The Difference Between God and Jesus

Was the New Testament Originally Written in Greek Or Aramaic?

The New Testament was written in Koine Greek, which was the most popular form of Greek at the time and the Greek dialect of the common people.

However, there are still a few Aramaic words found in the New Testament. The most notable example comes from Mark 15:34 ESV when Christ quoted Psalm 22:1 as he was about to die:

This is the Aramaic phrase that’s slightly different from the “’Eli Eli lema sabachthani?” found in Matthew 27:46 ESV.

However, the New Testament is primarily written in Koine Greek, which was the go-to language in Palestine during the rule of the Roman Empire.

And why do you think the New Testament authors used Greek and not Hebrew or Aramaic for example?

Because Greek was the official language (alongside Latin) in the Roman Empire, which opens the doors for Scripture to be understood by the Gentiles, not just the Jews.

And since this was the most commonly used language at the time that made it possible to reach the lost world, the New Testament was written almost exclusively in Greek.

Of course there are a few small exceptions of Aramaic phrases like “Eloi Eloi lama sabachthani?”

Who Originally Wrote the Bible?

Moses is the initial author as the first five books of the Bible were ascribed to him. However, he’s not the only person who was inspired by God to write parts of the Bible.

In fact, the Bible consists of 66 different books, most of which were written by different authors.

You could say that the Bible was written in one book-at-a-time manner.

Here’s a list of all known and unknown human Bible authors who were inspired by the Lord Himself:

It’s worth pointing out that some books like the Psalms have multiple authors.

Who Wrote the Bible God or Man?

The ultimate author of the Bible is God Himself, the Creator of all things, visible and invisible.

Through the process of inspiration, the Lord inspired human writers such as Moses to physically write the Living Word of God over the course of around 1,500 years.

The Bible itself tells us that all Scripture is God-breathed:

“All Scripture is breathed out by God and profitable for teaching, for reproof, for correction, and for training in righteousness, that the man of God[a] may be complete, equipped for every good work.” 2 Timothy 3:16-17 ESV

In essence, God superintended human authors so that each writer’s individual style was intact while at the same delivering exactly what the Lord intended.

We see this on full display across Scripture with the four gospels of the New Testament being a great example.

Each gospel carries the specific vocabulary and style of the writer while delivering precisely what God intended.

Yet, the process of inspiration is quite difficult to understand for our puny human brains. And that’s perfectly normal.

Thankfully, God sheds some light on how inspired writing works through His servant Peter:

“For no prophecy was ever produced by the will of man, but men spoke from God as they were carried along by the Holy Spirit.” 2 Peter 1:21 ESV

Basically, God inspires a person to write something and that person simply writes the exact thing the Lord wants in his own style.

And we have strong evidence of this in the form of the many, many fulfilled prophecies from both Old and New Testaments.

Even though the human author of some Scripture books is unknown (e.g. Esther and Hebrews) that’s irrelevant.

What matters is that we all know Who the Divine Author of each verse in the Bible is. YHWH, the God of Israel, the Lord of Hosts, our Creator.

The Bible wasn’t written in a single language. In fact, it was written in 3 specific languages:

But more importantly – we have to remember Who is the actual Author of all Scripture.

The human authors who wrote the different books of the Bible didn’t write Biblical passages by themselves.

They wrote Scripture by the process of inspiration from the Lord, who perfectly conveyed His Living Word while retaining each human writer’s unique vocabulary and style.

Don’t forget that all Scripture comes from the Lord, Who is the Author and Creator of everything in existence.